Slam Dunk festival celebrated its tenth birthday this year with a monster party! With a diverse line-up including Panic! At the Disco, Of Mice & Men, Hellions, Blood Youth, As It Is, Yellowcard and many more, it was one not to be missed! Four writers (including myself at the Midlands) attended over the course of the weekend and give their views below! 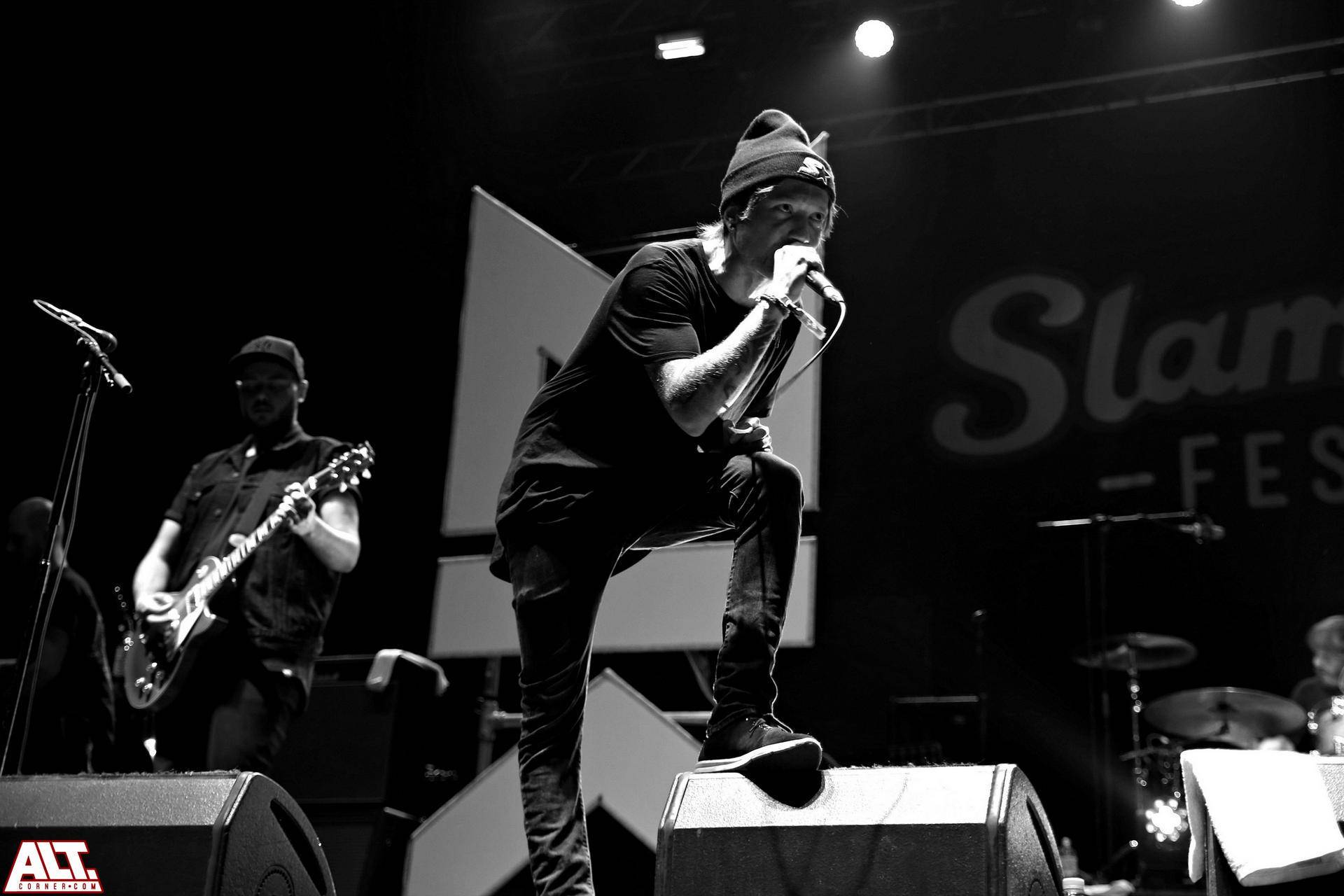 Slam Dunk festival celebrated its tenth birthday this year with a monster party! With a diverse line-up including Panic! At the Disco, Of Mice & Men, Hellions, Blood Youth, As It Is, Yellowcard and many more, it was one not to be missed! Four writers (including myself at the Midlands) attended over the course of the weekend and give their views below:

Boston Manor play what I would call a more traditional pop punk with hardcore breakdowns. With their pop punk guitar, tempo changes and hard hitting drums you can’t help but get excited when listening to their live set. The new songs like ‘Gone’ have more meaning and a deeper impact. My one slight complaint of this band is they are from Blackpool but Henry sings with an American accent, which I see with too many pop punk bands. Put some Blackpool twang in your voice.! 8/10 if you love pop punk 6/10 if you don’t.

Mayday Parade came on and the first thing that hit me was how heavy the drums were. There was plenty of pop punk teen angst. There is something about the drums I couldn’t put my finger on. It is like Jake’s playing with two different drum sticks. The guitars are very pop punk heavy but have plenty of rock flex with an old school emo feel (My Chemical Romance if you will). Derek was pouring his heart and soul into his vocals and you couldn’t help but add some of yours too it also. 8/10.

Yellowcard come out unfortunately late due to technical issues. And you can see Ryan was disappointed by this even in his body language and apologies in between every song. Ryan however is one of the best vocalists I have seen live and I don’t think he could sing a note wrong. Still with a short set they managed to fit in violin and play the adored songs Ocean Avenue and Only One. With We Are The In Crowd’s Rob on drums giving then a well-rounded sound. The set was short but sweet.8/10

Slam Dunk Midlands – Birmingham (written by myself and Jolene Hughes)

First up on the main stage is emo sweethearts Moose Blood. Their set is delayed due to some technical issues with a mic not working but the crowd wait patiently and are not disappointed when the band start. The crowd are very interactive as Moose Blood play through tracks from I’ll Keep You in Mind, From Time to Time as well as debuting some new tracks which went down brilliantly.

Trash Boat start the day right on the Key Club stage with a very lively performance and a pounding bassline. The quintet sound great as they play through tracks including Perspective and Eleven. There’s also the first pit of the day as they bring back tracks from their debut EP.

Hellions bring the heavy to the Kerrang! Fresh Blood stage. There was high energy levels with constant jumping around and tight vocals, a pit taking up a good chunk of the crowd opens up and the band close their set with new single Body of Life.

The Word Alive technically opened the Atlas stage due to a fault with Coldrain’s equipment causing them to have to pull out during their opening track but that didn’t hinder the American metalcore quintet. At times, it is hard to hear frontman Telle Smith’s vocals but when you can hear them, you are not disappointed with the tight screams and heavenly cleans. There is a lot of crowd interaction from the start and the whole band work the stage well. There are tracks from new album Dark Matter including the incredible Face to Face.

Young Guns provide me with my first ‘woah’ moment of the day when I arrived to see the main stage arena absolutely rammed at only 2:30pm! Never ones to shy away from the crowd, frontman Gustav Wood ensures that crowd participation is at an all time high as they play through tracks including Speaking in Tongues, Risin’ Up, Bones and new track Bulletproof. The quartet sounded incredible with intricate guitars and beautiful vocals.

Creeper are another who were definitely on the wrong stage! There was a lot of talk about the previous day’s exploits which saw several hundred people turned away from their stage due to a high-34e3eeeee3capacity crowd and today could have possibly gone the same way. However, on stage, the goth punks were on fine form as they play through tracks including Misery, Henley’s Ghost, Lie Awake. There’s no shortage of crowd interaction with a huge circle pit during The Honeymoon Suite and a crowd-surfing competition during Astral Projection. On stage, the showmanship and vocals from frontman Will Gould are top-notch, crunching guitars, and a proper punk feel from the sub-headliners showing they are more worthy of a larger stage (next appearance for definite!)

Kerrang! Fresh Blood stage headliners New Years Day show exactly why they are making huge waves in rock. The quintet play through tracks including I’m About To Break You, Scream, Malevolence and Angel Eyes and for a band who were on their forty third show in a row (of a 60 date run), there didn’t seem to be any sign of tiredness. Scream queen Ash Costello is note perfect and commands the crowd well while the riffs and guitar solos from Nikki Misery and Jeremy Valentyne are insane, the former as usual putting on a very theatrical performance.

There is a slight delay in Hit the Lights hitting the Key club stage but that only seems to add to the excitement the much younger audience felt for their favourite band to come on, and with angst ridden songs you can see why they are so popular with the teen audience. Despite this, it did take the band a good three songs before the crowd really got into the music. – Jolene Hughes

Real Friends, also on the Key club stage, were one of only a few bands who actually start on time. The highly popular, five-piece pop punk infused band give an incredible performance and are no doubt one of the crowd’s favourite of the day, the crowd are alive from start to finish of their set and at one point there is even an attempt of a mosh pit. – Jolene Hughes

Mallory Knox are one of few British bands that have managed to stick around and go from strength to strength. The crowd absolutely adore them and as per usual they put on an incredible performance. A set list that included new and old songs, it was enjoyed by all, and when Mikey announced the band were going back into the studio to write and record their next album, the room filled with a rapturous applause and cheers. – Jolene Hughes (you can view an in-depth review of Mallory Knox from Slam Dunk South by Vicky Shaw here)

Of Mice and Men are the headliners of the Atlas stage, and it’s a well-deserved slot. Despite having to compete with Panic! at the Disco on the main stage, the room is packed. Despite all the band have been through the past few months, in particular lead singer Austin Carlile, they put on an incredible performance with smiles all around. The set list did predominantly contain new songs with the odd older song thrown in and the crowd went wild when Second and Sebring came on. – Jolene Hughes

Due to the sheer volume of reviews we had and to not make this so boring, we split it into two parts. You can check out some more reviews from the weekend here where we compare some of the same band’s performances at different dates.