Eastbourne pop punk act, ROAM have done pretty well for themselves so far. The band signed to US punk label Hopeless in 2014, joining a star studded roster containing bands like Sum 41 and New Found Glory. Having already released an EP on the label in 2015 and their debut album, Backbone, last year the […] 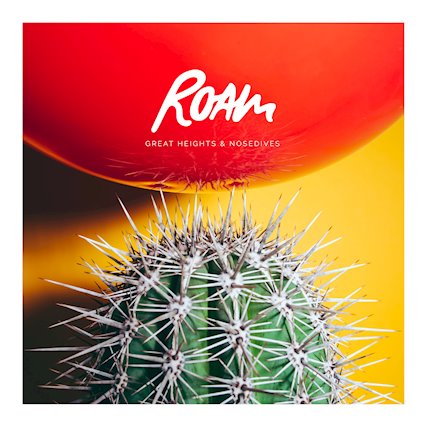 Eastbourne pop punk act, ROAM have done pretty well for themselves so far. The band signed to US punk label Hopeless in 2014, joining a star studded roster containing bands like Sum 41 and New Found Glory. Having already released an EP on the label in 2015 and their debut album, Backbone, last year the bandare back with more pop punk goodness for us. Great Heights and Nosedives comes out on October 13th and has already spawned two singles.

Lead single, Playing Fiction comes in the first half of the record and builds up to a fist pumping chorus. It’s quintessential pop punk but it contains an energy unique to the band. The lyrics and hooks on the track are more intricate than many other acts from the genre would try and this works to great effect. The production across the track brings the song to life by keeping things tight and even adding additional parts for effect. It’s a great first single and fills its place on the album well.

The next single from the album is also the opener, Alive. The track opens up the record in bombastic pop punk fashion. Bouncing verses and proud vocals from the track and carry it through to big, uplifting choruses. Gang vocals come into play later into the track too, another example of the band taking the pop punk playbook and rearranging it in their own way. The following track, Left For Dead also deserves a mention for it’s choruses which are some of my favourite parts of the album.

In the second half of the album we get the song Flatline. It starts out with an energetic intro riff that moves to tense verses to let the song really explode into it’s choruses. It’s a song that’s sure to be a hit live with all it’s energy and sing along potential. A few tracks later we get the track Home. It’s the close of the record and it takes on the role and emotions you tend to associate with closing tracks but it does it a way so typical of this band. Massive choruses, verses stamped with their trademarks and incredibly tight instrumentals. It’s more than worthy to close an album this good.

Great Heights and Nosedives certainly sees the band at the former. The band shows incredible potential on this record. This is a well timed pop punk record that is as modern as it is nostalgic. Every inch of the thing is coated in rock solid production and the songs are written with a level of skill that this genre doesn’t usually see but I know I’m more than happy to be seeing it here. The instrumentals on this record all feature much needed flair and creativity. Parts appear that might not be so typical of pop punk but they fit so well because they give the album to which they belong individuality in a genre often seen as overly straightforward. British pop punk doesn’t always click with some fans who are just used to the American variety but this record will keep even those fans happy. It feels authentic because it is authentic. I certainly can’t wait to see where this band goes next!