My love for Orchards go back a little while. It’s sometime in the summer of 2016, I am yet to start reviewing for Altcorner but I’m looking at university courses. I turn up to an open day in Brighton and everyone is herded into a small presentation room with a stage. Orchards played two songs […] 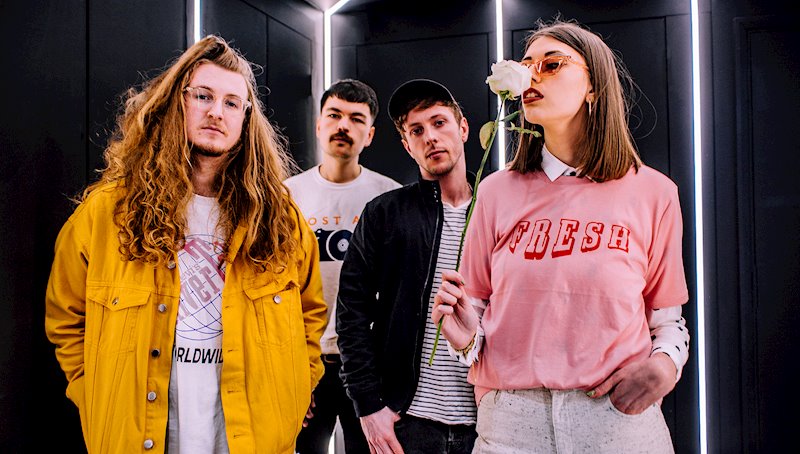 My love for Orchards go back a little while. It’s sometime in the summer of 2016, I am yet to start reviewing for Altcorner but I’m looking at university courses. I turn up to an open day in Brighton and everyone is herded into a small presentation room with a stage. Orchards played two songs on that stage and from that moment I was hooked on their glittery, math- infused fun. When I heard that they’d signed to Big Scary Monsters and were due to release an EP I jumped for joy and I jumped higher again when I got the chance to review it. To catch up those unfamiliar with the band, the four-piece formed in Brighton while studying music and have shown off what they’ve learnt from day one. They fuse math rock guitars with pop sensibilities in a way that makes your head whirl but in the best way. The release I mentioned earlier is due this Friday on Big Scary Monsters and here’s an idea of what you can expect.

The EP kicks off with Luv You 2. It’s upbeat, it’s dreamy, it’s the one of the new singles from the EP and its simply fabulous. Go check it out now! Big gang vocals, crunchy guitars. Upon first listening it took me by surprise but upon hearing the tracks that follow it, it all fell into place.

Drama King grabs the baton and runs with it. From a song writing angle it offers a fresh perspective on a familiar theme. Evers, as ever, vocalises the songs concepts perfectly. Lyrically articulate and delivered with such style that you can’t help but sing along (You’ll be doing a lot of that across this EP). The instrumentation certainly holds more than solid too. Swirling guitars guide the song loosely while a tight rhythm section really grips the tracks and carries us through.

Be Here picks up next. The star of the show on this track is the relationship between the lead vocals and bassist Dan Fane’s backing. They come together and drift away in a perfect little dance to mirror the lyrics they’re singing. I’m still shouting, “Falling for you, falling for you” and it’s been far too long.

Double Vision is the latest single from the EP. Quirky and danceable all at once in true Orchards spirit. Drummer Will Lee-Lewis’ drums form the core of the track really carry the tracks natural swagger while everyone else lays their colours on top. It’s got a killer hook and you’ll love it. You can check it out right now so just do it already, you don’t need me to explain it to you anymore.

Age Of You starts off the EP’s second half. It combines precise guitar work with tight vocals and fist pumping melodies. It’s the kind of song they’ve always been so good that keeps me for one coming back for more. Tension builds in the second half with delay weirdness adding layers and oddities that make the song so fun to listen to. It might honestly be my favourite Orchards track to date but with so much competition I refuse to fully commit to that statement. It’s certainly a track of epic proportions.

Old staple Peggy comes next. From it’s release Peggy has always been well loved which partly explains it’s inclusion here. The rest of the explanation for why it’s here is that it’s just an awesome track. The track has a bounce that jaunts along with little intricacies hidden about as it goes. Again, your ears will tell you more than I can so go check it and its glittery video out.

The one two punches of Honey and Darling round out the EP. Honey is a glittery piece of perfection. Pop hooks wrapped up in tight rhythms and strange delayed guitars build to a killer chorus. Lyrics and vocals on point as ever with that complex but easily followable riffing filling in the silence. Another case of guitarist Sam Rushton serving up killer guitar work that scratches both noise and math rock itches. The delay pedals are out in full force and that’s what we like to see. Darling comes in to round out and sees the band work dynamics in the way that we all know they can. More wonderfully weird sounds from the guitars, how does he do it? The guitars, as they have on many previous tracks, utilize wild delays and noise elements while keeping solid and structural to the song. I want to know the secret but that could spoil the magic so let’s not do that. A loud and proud bridge and chorus section carries us towards the end of a thankfully long EP. Another killer blast of drums and it’s over but let’s reflect on this little piece of perfect.

Now yes, I might be a little biased but even having followed the band for some time now I was still surprised by this new offering. The blend of styles and sensibilities makes for a release that I just can’t fault. Am I getting too into this band? Maybe but they’re genuinely exciting for me with their unconventional blending of styles and unique approach. I only wish I was at their EP release show this week.

Losers/ Lovers is out on July 6th, this Friday. If you made it so far and still don’t want to check it out why? Go listen to the singles and prepare yourself!