Mallory Knox return with their eagerly anticipated forth album and, in a brave move, it’s self-titled. When it comes to heightening expectations, that’s one thing that does it. Self-titling implies that this record, these songs, are definitive of the band. 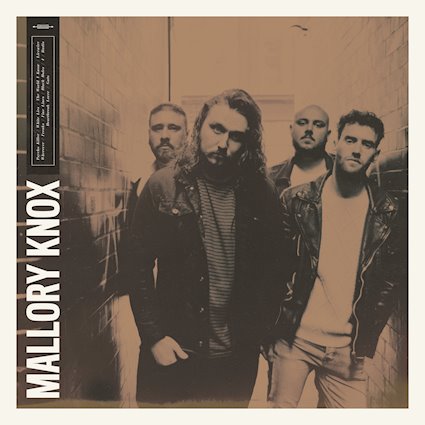 Opener ‘Psycho Killer’ sounds like Kaiser Chiefs met classic rock, and I absolutely love the solo! There’s some great riffage going on here, which does distract you from what is a bit of a weak chorus. Lead single ‘White Lies’ follows and it’s much more reserved, chugging along in foot-tapping fashion. Certainly catchy, it’s the perfect single, and means the album begins with the rough edges and the pop sensibilities side by side.

The album is really made up of these two sides that the first two tracks represent. There’s the straight up rockers, that oftentimes contain some of the best riffs and licks I’ve heard in a while (see ‘The World I Knew’ and ‘Freaks’). Conversely, there’s the poppier little staples. But when I say poppier, they’re tasteful sprinklings, showcased in the sing along verses of ‘Fine Lines’; a track which also has some underlying guitar licks that a metal fan would die for.

Some of the vocals are delivered with a punkish snarl, such as the delectable ‘Wherever’, while some of their post-hardcore past makes a glimmer of a return in ‘Black Holes’. The guitars in ‘4’ remind me a little of ‘Renegade’ by Daughtry, and that’s a good thing. A very good thing.

There’s only two criticisms, really. Mallory Knox fail to change up the pace much at all through the 12 tracks, meaning the record is somewhat of a riff laden assault. Though that isn’t a bad thing, some of the tracks blur together. On top of that, ‘Radio’ and ‘Heartbreak Lover’ lower the quality a little bit at the end, but the hard rock assault of ‘Guts’ resurrects it right at the finale, a track that’s a very late highlight and certainly a must-hear.

Overall, they’ve certainly made a record worthy of being self-titled, having always bought into the idealogy that ‘you’ve only got one self-titled record’. It’s true, and thus if you choose to self title it, you have to be sure of it. Mallory Knox are sure of these songs, and it shows. They are in control from start to finish.