An early Halloween treat (no trick, we promise) for Hollywood Undead fans out there this Thursday, as it’ll be the release of their brand new album, V. Let’s get right into it. California Dreaming is first up on the album, and a superb track to start the album off. There’s a great use of rap […] 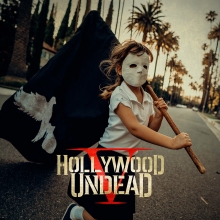 An early Halloween treat (no trick, we promise) for Hollywood Undead fans out there this Thursday, as it’ll be the release of their brand new album, V. Let’s get right into it.

California Dreaming is first up on the album, and a superb track to start the album off. There’s a great use of rap in the verses and metal in the chorus. Not only does it introduce the album well, it would also be a great track to start off a live show to get the audience pumped up.

Whatever It Takes starts with an electronic-like style and catchy rap lyrics to begin with. There’s also a slight use of strings thrown in there too. While California Dreaming did have rap in the verses, it focused more on heavy metal. This track, however, turns it’s attention to the band’s rap instead. Just shows that they’ve still got talent in both genres.

Bad Moon tells the story of transforming into a werewolf (hence the title), but instead of fearing the change, they instead embrace it and can’t wait for the “bad moon” to arrive. Personally, my favourite part of this song was the rapping at the bridge of the song, describing the final transformation and their werewolf form roaming the streets and the woods.

Broken Record doesn’t actually sound like broken record, but rather, our minds sounding like one. The first verse jumps right in with the heated rap lyrics about feeling lost and bad thoughts that never seem to stop coming. The chorus on the other hand takes a slightly different turn, as the pace of the track slows down and the melody changes completely. The transition between the two is not too abrupt and runs smoothly, and while the rap verses tend to consist of curse words and overall anger, the chorus takes more of a melancholic turn, especially with the lines “Now if somebody only save me from this broken record that’s playing in my heart”. The mix of bitterness and grief creates a briliantly angst-ridden track. Definitely my favourite of the album.

And finally, there’s Nobody’s Watching which, instead of being about the neverending demons that plague our minds, it’s about standing up and conquering them, and not being afraid to stand up, hence the lines “sing likes there’s nobody listening”. It reminds me a little bit of Sing by My Chemical Romance, which has a similar kind of approach, but obviously, not exactly the same. Great message, great use of rap, electronic and even some choir at one point and great track overall.

We’re certainly not disappointed with this album, and we’re sure fans of Hollywood Undead will feel the same way too.