Hawthorne Heights have never really slowed since their inception. Their eighth full length, The Rain Just Follows Me, shows that the band still have a lot to say. 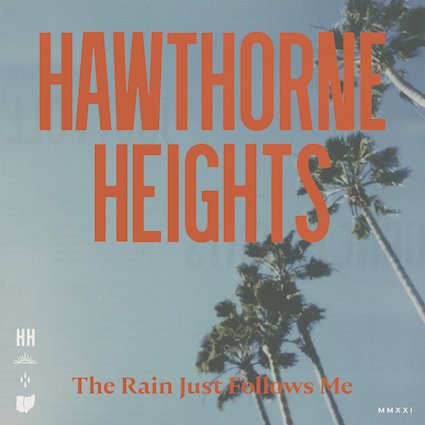 That being said, this isn’t their strongest work. Lead single and opener ‘Constant Dread’ is a little underwhelming. There’s nothing especially wrong with it, but when compared with ‘Hard To Breathe’ and ‘Pink Hearts’ (from Lost Frequencies and Bad Frequencies, respectively) or even ‘Bring You Back’ (from Skeletons) it’s easy to see why this track is a little disappointing. It certainly warrants its place on the record, but it isn’t lead single and opener material.

In fact, the heavier side of the band does fall short here, but that really allows their softer, more melodic side a well-earned time in the spotlight. The title track is a moving, passionate and cathartic sing along, with Woodruff sounding his most comfortable. The same can be said for highlight ‘Tired And Alone’, a track that wouldn’t sound out of place on a Yellowcard record. ‘Spray Paint It Black’, featuring Bayside’s Anthony Raneri, is another slower, moving, atmospheric track, with a stellar guest performance from Raneri which really lifts the song higher.

Some of the more upbeat (I won’t say “heavier” because, frankly, that would be inaccurate) tracks include ‘Holy Coast’, with its crunching riffs and atmospheric pre-chorus (and catchy chorus following), the brilliant ‘Palm Canyon Drive’ – which wouldn’t have sounded out of place on Bad Frequencies – and ‘Seafoam’, a song made by William Ryan Key’s (Yellowcard) feature. He and Woodruff are two vocalists I have always felt would go well together. More could’ve been achieved from this but it’s a good song nevertheless.

Some of the underwhelming cuts include ‘Thunder In Our Hearts’ and ‘Dull Headlights’ which, though not being especially bad, are just unimpressive from a band of this stature. The same can be said for the final two tracks, ‘Words Can’t Hurt’ and ‘Bamberra Beach (The End)’. Neither song sparks joy and this results in the album ending rather flat – much like it began.

Two of the biggest problems with the album aren’t actually big problems at all. The unclean vocals sound very off for most of the album, but they appear so infrequently that it doesn’t matter too much. On top of this, whoever wrote the album name in that colour, in that font, over the top of that green tree should be given a good spanking.

The Rain Just Follows Me is a standard Hawthorne Heights outing at this point. They’ve got a sound and, though they vary it a little bit, mostly they stick to what they’re good at. They’re never going to make a magnum opus now, and that’s alright. This record adds some good songs to their catalogue and is worth a spin, even if you cherry pick the ones you love and forget the rest. Upon putting the full stop on the end of this review, that’s exactly what I’m going to do.