Has 2018 started off a little rough? If it kind of has then I might have just the ticket for you here. Melodic Hardcore from Great Collapse featuring current and ex-members of Strike Anywhere, Rise Against, Nations Afire, Death By Stereo and Set Your Goals. The follow up to their debut, Holy War is almost […] 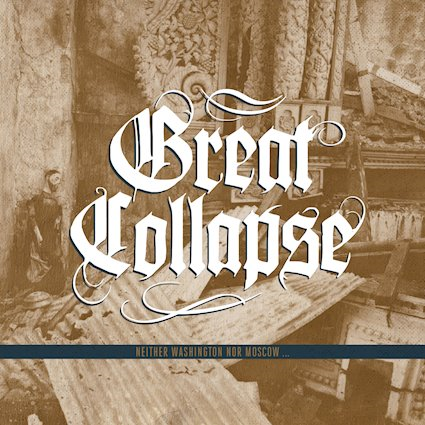 Has 2018 started off a little rough? If it kind of has then I might have just the ticket for you here. Melodic Hardcore from Great Collapse featuring current and ex-members of Strike Anywhere, Rise Against, Nations Afire, Death By Stereo and Set Your Goals. The follow up to their debut, Holy War is almost here and releases on January 26th. Neither Washington Nor Moscow… Again! is it’s name and it was recorded in a fast and furious manner of the summer of 2017 and it’s laced with the political undertones of that time and supported with pounding instrumentation, all providing a base for dynamic vocals.

The record starts out with a sucker punch of a track, A Tale of Two Cities. A clear statement of intent. Something to base your expectations of the rest of the record off of. It’s in your face, it’s in your head and it’s a great opener. Short, sweet and to the point, it has to be the best way they could have opened the album. Atomic Calendar comes a through tracks later, easily bridging the gap between the bands melodic and heavy elements.  Around halfway through the record we get Southern Exorcism, a clear favourite of mine with a pounding rhythm and unrelenting vocals throughout the track. It even takes a downturn halfway through, diving into a slowed down and dirty section. This song amongst just about every other song on the record are just built for the stage. Colony Blackout comes along not long after with a softer start before opening up into another raucous punk track. The record carries it’s momentum so well, giving little opportunities like this to catch your breath before picking the pace back up. The album ends with Escape Velocity! a sharp and concise track that helps see the record out with melody and fierce guitars.

When all is said and done, this record is a great, great and greater hardcore record. A strong recommendation for fans of bands like Rise Against wanting to hear more of that area of punk rock and even hear the scene that those bands draw strongly from. They’re a super group putting out super music!