Soon after doors open a huge wall of sound rises through the house speakers to a fairly empty room as THECITYISOURS takes the stage by storm putting on a massively impressive show to kick things off, while the Islington Academy gradually starts to fill. A cover of Labrinth – Earthquake has people singing along, although […] 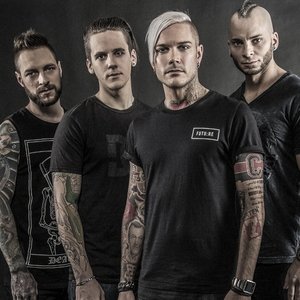 Soon after doors open a huge wall of sound rises through the house speakers to a fairly empty room as THECITYISOURS takes the stage by storm putting on a massively impressive show to kick things off, while the Islington Academy gradually starts to fill. A cover of Labrinth – Earthquake has people singing along, although there is no necessary need for help, as the clean vocals are spot on hitting great high notes flawlessly while the screams and growls stay strong throughout each track making these guys look like true professionals you’d expect from any heavyweight titans in the genre. Only a handful of voices were heard when asked if anyone were familiar with THECITYISOURS, which must be a nice feeling to know undoubtedly their fanbase will build greatly from this epic performance as everyone in the room are 100% backing these guys for keeping the scene alive. I could happily leave now feeling like I’ve already seen the main act, kudos to the only UK band of tonight.

Tough act to follow as Disclarity try their fare with the more heavier approach as the frontman hones strong growls which kept onlookers in full headbang mode. The singing parts could have been stronger but regardless, a great performance from these guys with fun attitude towards the crowd acting very chilled between each song. Crowd respond very well to the sheer power driven chaos which gets all in attendance fired up from the set of monstrous tunes.

The final support band Siamese take their places and open with a fun sense of humour and an interesting line up which included a violinist (which was coloured and carved in shape of The Joker from Batman) as the first track infuses a funk beat and a pop vocal style with the riffs and humour. From Copenhagen, the frontman really has a feel for the crowd, as jokes are thrown and laughter fills the room. Promptly ending a song that lead into a sample of Ed Sheeran – Shape Of You mashed with Beyoncé – Crazy as the vocalist humours across to the audience if we are at the right show, but if only you was there to believe me when I tell you this led into Refused – New Noise making an unlikely combination of song selections yet perfectly fitting together. Unfortunately being told their set had to be cut short they joke about the Islington Academy not liking them, as they leave the stage the reception for an encore builds, but alas we must move on while Dead By April gear is unravelled on stage.

Lights go down, and several tubed lights either side of the stage light up as the expected samples play leading into opening track More Than Yesterday. Energy and passion flairs throughout this now packed out room screaming every word back with raised fists. A mix of both early Dead By April including Stronger and their first song written Lost alongside 8 of the tracks featured on the latest installment Worlds Collide brings fans both new and old to their peak of happiness. As Jimmie (unclean vocalist) and Pontus (guitarist / clean vocalist) remain to be the only 2 members from the beginning in 2007 (excluding Jimmie’s leave between 2013 – 2017) they pay their respects to each front foremost gig attendee with fist pumps multiple times during the set really settling well with the fans who have helped them to this very day.

I’m happy to see Jimmie back in the drivers seat, with his gut churning growls and stage presence being extremely powerful and on point there is no doubt in my mind that Dead By April are better than ever with the years gone by and the line up falling into place. Without the use of samples it would probably feel very empty, but that is where the excitement lies with DBA, the atmospheric, synth driven tracks really create each song in its own way it blows me away to hear the dynamics of them more so live. While leaving the stage with My Heart Is Crushable, the crowd are still waiting for more while “D-B-A” chants grow louder after a couple of minutes we are graced with the title track of the latest record release Our Worlds Collide followed by the classic track Losing You. The guys get a great reception as they close the set and come down to the barrier to personally thank everyone before lining up on stage and taking a bow.

A great night is had, 4 amazing acts ranging across all styles of the genre bringing a combination of unique elements to the show while personally discovering some new talent in other upcoming artists.

Check out Dead By April – Warrior: