Texan metalcore outfit Crown The Empire are back with their fourth album, Sudden Sky. 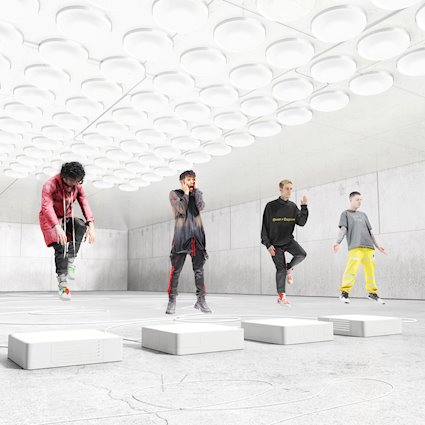 The band call the album a “digital representation of who we are at this moment in time”, something that feels quite apt from the albums harsh and electronic opener, (X), which sets the mood well. More digital references are scattered across the record’s lyrics but referring to the album as a digital representation seems to ring true in more than just it’s lyrics. The album’s sound, at times, reflects the bands somewhat tumultuous past.

Once the aforementioned (X) dies away, 20/20 opens the record right up. A fuzzing, rolling riff takes the lead. Vocals and colossal drums join for the build. Once everything is in, the track thunders at pace. The production is full and nuanced with vocal snippets scattered around. At times the programming edges on Linkin Park territory with the chopped vocal samples after the second verse. The song still has its feet planted in metalcore, the songs bridge affirms that.

What I Am follows, showing a slightly more tender side of the record with its tale of lovers coming apart delivered through yearning choruses. The vocals on this chorus are a perfect example what I love to hear from bands like Crown The Empire. A weirdy guitar line sees us out of the second chorus and into a brief but exposed bridge. The backing vocals that crop up across the chorus that follows just push the track up to another level before it’s ending.

Red Pills comes at the records halfway point and it’s a heavy one. The verses stand exposed but soon enough those guitars burst in again. The choruses are stellar once more but it’s the broken down bridge section that’s the star of this track. A tense, pounding first half gives way to an epic second half before we’re back into the chorus.

MZRY follows and sees the band flirting with electronica once more but the subsequent track really grabs my attention. Under The Skin is that song, orchestral arrangements surround reaching chorus sections with screamed and clean vocals intertwining. The song is weighty, making you really feel what it’s putting across. The digital stutters towards the end and other electronic touches within the track help keep the song within the albums sonic palate. Another highlight of the record for me.

SEQU3NCE follows in contrast to the track before. The sound design on the verse keeps things dirty even in the absence of the heavy guitars. Effects at times make the guitars sound glitchy, once more rooting the album in this “digital gone crazy” sound. March of the Ignorant that follows is the opposite end of the spectrum. A digitised drum beat and synthesized vocal effects form the centre of the track. The track has more in common with Twenty One Pilots than the rest of the tracks on the album. It’s a fun break from the crushing metalcore and I definitely appreciate that on an album.

The title track rounds the record out with vocals calling out in the songs intro like a call to arms. We’re right back in that swirling pit of guitars. It’s a defiant closer that puts the album to rest while in many ways looking forward to the next one. It’s got everything that made the tracks before it so good while having its own energy.

Sudden Sky is a solid record. It has it’s highlights for me, those being What I am, Under The Skin and even the oddball March of the Ignorant. It has a lot of what I once looked for, back when bands like Crown The Empire were all I’d listen to. Those soaring choruses and heavy guitars are great but the extra, electronic touches really make it much more interesting to listen to.