Creeper – Eternity In Your Arms

Southampton punks Creeper are more than just a pretty decent band, they give fans a whole other world to live in. After the release of third EP The Stranger (Roadrunner Records, 2016), the band’s disappearance and the story of James Scythe sent fans into a frenzy and attracted media attention throughout the world. During this […] 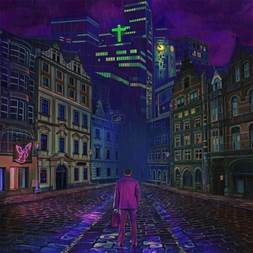 Southampton punks Creeper are more than just a pretty decent band, they give fans a whole other world to live in. After the release of third EP The Stranger (Roadrunner Records, 2016), the band’s disappearance and the story of James Scythe sent fans into a frenzy and attracted media attention throughout the world. During this period, the sextet announced details of their debut album Eternity, In Your Arms, which is set for release on March 24, 2017. The record is heavily based around the James Scythe and The Stranger saga, however, for the purpose of this review, I won’t be analysing it that way as it is long and complicated. So let’s focus on the music!

Those that are reading this and know me, know just how much I love Creeper and how hard it is for me to say a bad word about them but sadly I am not really much of a fan of album opener Black Rain. Don’t get me wrong, the track is anthemic and the introduction including a spoken word monologue by Ellie from Signals and the way Will and Hannah’s vocals mix in the chorus are great but for some reason, it just doesn’t grab me like every other track by the band. However, I am going to reserve full judgement until I’ve heard it live as that may well change my opinion. Poison Pens brings the old Our Time Down Here hardcore vibes and is my favourite of the unreleased album tracks aside from Crickets (which we’ll get to later). It’s fast, heavier and keeps you hooked. It’s also quite different to what you’d expect from the punks but a brilliant track. Suzanne was a track that I was unsure of until I heard it live and now, I can’t get enough of it, although the lyric change from the original version is still taking some time to get used to. This was the right choice to lead the album as it is a banger of an anthem.

The same can be said for Hiding With Boys, it’s another massive track that I fell in love with straight away. We’ll only briefly touch on the remastered version of Misery as we covered it in our The Stranger EP review (here) however it is just as heartbreaking as the original and still embeded in my heart as my favourite ever Creeper song and it really shows off Will’s vocal ability while giving you the chills.

Latest single Down Below is catchy and if it doesn’t have you at least tapping along, then there is no hope for you (no but seriously, there will be no hope). Room 309 is a fast and in your face punk anthem. Now back to Crickets that we mentioned earlier. This acoustic track has a twist in the fact that Hannah takes lead vocals for the first time and it is beautiful. Anyone who’s seen the band live will know this but now it’s documented for everyone that she has a really great voice! Lyrically, it seems like a big ‘fuck you’ to that ex that you’ve got over. Darling picks up the pace again and Winona Forever is a track that would probably be the soundtrack to my life if ever a movie was made about me. It’s a typical Creeper anthem. Fast guitars, a big hook, strong drums and is a nod to Winona Ryder, everyone’s favourite goth actress. Closing track I Choose To Live slows things right down with it’s piano intro and goosebump inducing vocals, although this is nothing that should surprise the average Creeper fan. It’s full of emotion and lyrically probably describes how the vast majority of young people feel with life.

Overall, this is an absolutely anthemic record. Each track is just as massive as the one before it and although I am not too keen on Black Rain the rest of the album more than makes up for it. Vocally flawless, there are strong drum beats, bassline and gritty guitars throughout. Like I said at the start, I didn’t go into detail on the record in terms of the plotline for the James Scythe saga because that is very longwinded, if you’re a fan of Creeper, you’ll definitely enjoy this record with or without looking for the hints and answers to the saga (James, we will find you!) and if you are one of the few who have been living under a rock for the last two and a bit years and don’t know who Creeper are, give this record a lsiten and you’ll fall in love like the rest of us!