According to their biography on their website, this EP is described as “their most refined and anger driven music to date”. This type of tag line builds up a lot of optimism for this release so lets see how it fared… 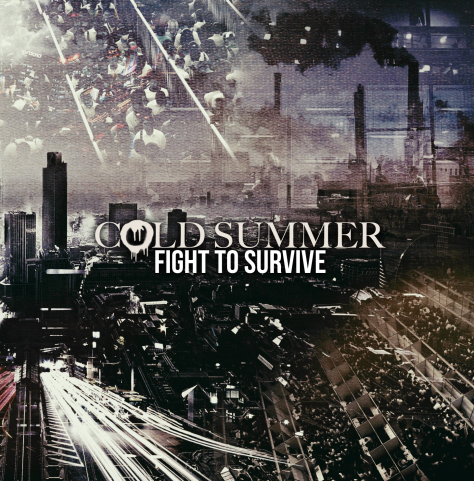 Fight To Survive is the latest EP release from post-hardcore group Cold Summer.

According to their biography on their website, this EP is described as “their most refined and anger driven music to date”. This type of tag line builds up a lot of optimism for this release so lets see how it fared…

The first track, Bear Eats Wolf, includes lyrics such as “I’ve been to hell and back. Every day, it’s the same” and “I won’t let them bring me down”. It’s easy to see what is meant when they say “anger driven” music when listening to this track. However, the track’s lyrics promote not letting anything or anyone drag you down. I personally love the lines “We won’t let these demons destroy our minds”. Overall, the whole track appears to be about feeling at war with yourself  as well as those around you, but despite this, you still fight on to survive. A great message, I’d say.

The following track is called A Time Imagination Forgot To Inspire. Judging by the lyrics, it refers to a certain period in time (unless they meant the present) where imagination was “pronounced dead” and there was no kind of inspiration for anyone. Aside from the lyrics, my favourite part of the track would have to be near the ending, where the track speeds up with thrashing instrumentals. It would definitely be the cue for headbanging if you heard this at a club or a gig.

Next, we have Car Crash (In Progress), which seems to focus on the issues of the world. For example, “We live our lives around jealousy and greed” and “It’s not a TV screen, it’s in the words we read” (though I think if you’re referring to this generation, “phone screen” would make more sense, but I digress). At one point, it also references the EP’s title, during a sequence where the vocalist screams “fight to survive” a few times, before the track continues. The track then goes on to describe the world as “a crash car that is in progress”. I’m liking the use of metaphors here, and this track is eerily true of the world we do currently live in

Referring back to Cold Summer’s biography again, they also state that “the record holds to right a world of consumption, greed and corruption. A call to arms for an apathetic generation”, and I believe this EP has done just that in magnificent style.