Boris The Blade are coming at us from down under this January with their new album, Warpath. The band, who take their name from an arms dealer, certainly haven’t lacked firepower with any of their previous efforts and Warpath comfortably keeps pace with their previous releases. This record isn’t one for the faint hearted, being […] 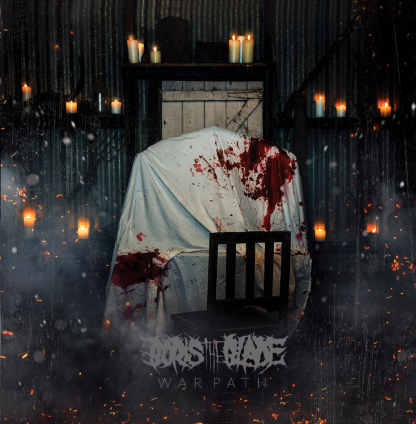 Boris The Blade are coming at us from down under this January with their new album, Warpath. The band, who take their name from an arms dealer, certainly haven’t lacked firepower with any of their previous efforts and Warpath comfortably keeps pace with their previous releases. This record isn’t one for the faint hearted, being as brutal as some of Australia’s wildlife.

The record opens with the title track which shows exactly what the band are about. No nonsense, no messing around, just heavy metal with a healthy dose of atmosphere to give the track some flair and help kick start the album. Throughout the record the band shows itself to be heavy but able to experiment, with tracks like Nihilist stripping back instrumentation at points, allowing the band to build tension ready for release when the rest of the pounding instrumentation kicks in. The track Paralysed takes the atmospherics even further, starting with clean guitars, merging into heavy heavy instrumentation and even dropping back at times for effect. Another track, appropriately named Devastator, shows what happens when the band is in the mood to break out and break things. The guitars are intricate and unhinged throughout the song. It’s a truly unrelenting track that showcases the bands brutality. The record closes with Solace, a track with a real climbing feeling that triumphantly signs off.

Having mentioned the instrumentation several times it may be easy to guess that I enjoyed the performances and writing on this album. The guitars dart between pounding rhythm and blistering leads with dancing parts tucked into various places that unhinge each track, making things all the more brutal. Everything is put into the track because it enhances the track with no room made for self gratifying solos. The rhythm section is rock solid throughout, the bass and drums on this record are a large part of what makes it feel so merciless. The vocals sit on top of both rhythm section and guitars continue the theme of heavy with a dose of experimentation. The vocals on this album are incredible with strong growls and screams throughout, showing the vocalists ability at both ends of the range. The vocals aren’t constantly performed at full scream either. The track Nihilist is a great example with one part layering spoken vocals and screamed vocals and at times phrases start at a half scream before diving into full scream, something hard to describe but that instantly jumps out when you hear it.

Overall, Warpath is a solid metal record. It’s brutal but thoughtful at the same time, making for rewarding repeated listens. It’s an album you can both listen to casually and listen to carefully which is an impressive feat. This album is a definite must listen for fans of bands such as Suicide Silence who need something to start the year with on January 27th when this album releases.