For the first time in three years, Black Lips will be releasing a new album, Satan’s graffiti or God’s art?, this Friday. Once again, I’ve been met with another subgenre that I wasn’t aware of named “flower punk”. It always gets my curiosities up though, so let’s begin. After a rather odd introduction track (Overture: […] 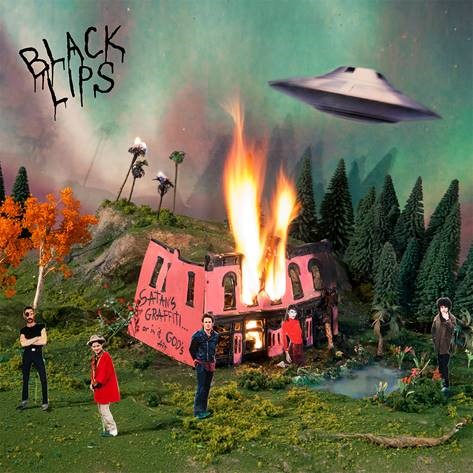 For the first time in three years, Black Lips will be releasing a new album, Satan’s graffiti or God’s art?, this Friday. Once again, I’ve been met with another subgenre that I wasn’t aware of named “flower punk”. It always gets my curiosities up though, so let’s begin.

After a rather odd introduction track (Overture: Sunday Mourning) with some saxaphone and kind of creepy la la las, the album officially begins with Occidental Front. The track has a very western-like feel to it. The instrumentals are fast, choppy, like it belongs in a Texan chase scene in a western movie. However, it does have moments where it slows down. For example, at the lines “when I die!”, before it soon picks up again. We also have a lot of screaming that sounds as if they’re being strangled, so there’s that too.

The Last Culdesac has a rather quirky introduction with the use of (what sounds like) chimes in a spacey/UFO style, before jumping into the main track. I find the track itself really captures the fuzzy and dirty rock n’ roll sound that the band have, and it’s given me a clearer understanding on the flower punk label.

Crysal Night has the style of a typical sad love song. It has a lovely melody and interesting lyrics that follows a rather strange but tragic story of two lovers being separated on crystal night. Oh, and we also get a quick appearance from Alvin & The Chipmunks, so look out for that as well.

As well as an introduction, we also have an interlude for the album, Interlude Bongos, which is just what it says on the tin.

Rebel Intuition immediately jumps in with a rapid and catchy tune. It follows a typical rock n’ roll style, but you can’t help but tap your foot along to it.

The last track before the finale is Losers Lament. This time, this track has a country-like style, following the story of a young boy going through life. It’s a fun one to sway and sing along too, if you know the lyrics.

The album finishes with Finale: Sunday Mourning. It’s pretty much just the same track as the introduction, except with some commentary about meeting a man with magic beans…as you do.

Overall, I think what I loved about this album was the variety. One moment I was listening to a rock n’ roll track, and the next I was listening to western/country. Variety is always what I enjoy when it comes to listening to a new album, and this one is no exception to that. That, and I love the weirdness of it all. After all, weird isn’t always a bad thing, right?