Alter Bridge have established themselves in recent years as one of the most formiddable forces in rock. With frontman Myles Kennedy’s soaring vocals that even landed him as vocalist for Slash, coupled with grungy and intricate guitars, there’s a certain something Alter Bridge have got that other bands lack. The big question is, have they carried it on only new album ‘Walk The Sky’, which follows my own personal favourite AB full length ‘The Last Hero’ 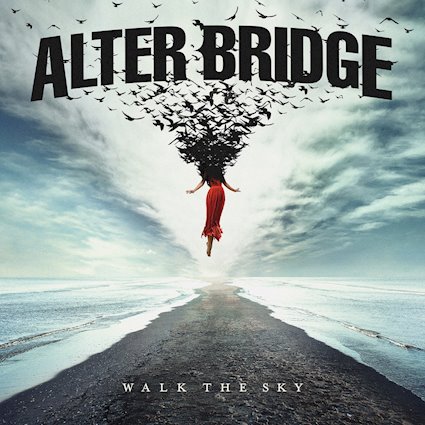 ‘One Life‘ serves as a seemingly pointless but marginally haunting opener, before the riff-laden lead single ‘Wouldn’t You Rather‘ kicks in. It’s clear why this was a single, merging the grunge sound of their early output with the hooky accessibility of tracks from ‘The Last Hero‘ (though not quite as infectious as ‘Show Me A Leader‘ or ‘My Champion‘).

‘In The Deep‘, which also received single treatment, has some classic rock level guitarwork that make it sit a little more comfortably with fans of straight up rock. Kennedy’s vocals, as always, are on point, but it still falls a little flat after what was a promising instrumental beginning. ‘Take The Crown‘, also a single, takes us back to the kind of guitars from ‘Blackbird‘ (I wonder if the lyric “come to life” was an intentional reference to that record?). Near six minute closer ‘Dying Light‘ was also a single, and that stuns me a little. It’s good for putting the album to rest, but isn’t the best as a stand alone track.

The fact is, the strength of this record is in the deeper cuts. The keys of ‘Godspeed‘ set it up to be a somewhat synthy anthem, and it’s really catchy. There’s a good beat and a wonder of a chorus. ‘Native Son‘ hits hard despite feeling a little tired at times. ‘Indoctrination‘ has the best guitar riff, simple but effective, and builds up to a blinding crescendo in the chorus. ‘Walking On The Sky‘ has the kind of vibe from older tracks, like ‘All Ends Well‘, and it works like a charm.

Alter Bridge didn’t seem scared to experiment a little here, either. The afore-mentioned keys in ‘Godspeed‘ are but one example, for ‘Pay No Mind‘ uses something similar to almost equal success, making a song you can’t help but tap your feet to (though ‘Godspeed‘ is still the highlight). ‘The Bitter End‘ also has a very poppy beginning and some of the best lyrics on the record.

The thing Alter Bridge miss is a slow burn, a track like ‘Watch Over You‘ to split up the assault of guitar + soaring vocal. Their sound is so based on intricate, powerful guitars and Kennedy’s vocal style that some tracks can seem to merge together. That being said, Alter Bridge have always been this way, so fans of the band will like it. They didn’t like ‘The Last Hero‘, and that’s where the band spiced things up a bit. Go figure.