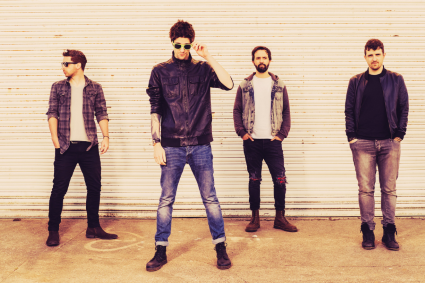 ‘Shattered Suns‘ gets you immediately hooked, and sees the band blend heavier rock elements with very melodic vocals and electric synth sounds. It’s almost reminiscent of Bring Me The Horizon‘s slower songs on ‘That’s The Spirit‘.

The EP was produced by Romesh Dodangoda who worked with BMTH, as well as Lower Than Atlantis, and Twin Atlantic. Considering how comparable the bands are to Witterquick‘s sound, it’s no surprise they worked with him, and it paid off. The production on the EP is outstanding, which is especially important when you consider the sound Witterquick are going for, it’s very easy to have arrangements sound messy, but luckily, that doesn’t happen.

‘Lie To Me‘ just reinforced how nice the vocals are, and how melodic the band strive to make their songs. A slower track than ‘Shattered Suns‘, but a great one. ‘Hiding Place‘ comes as a sharp contrast as the heaviest song on the EP. It’s dark, gritty, and full of driving drums, infectious guitar hooks, and a breakdown which crescendos before resolving in a powerful last chorus.

The anthemic ‘I Need A Friend‘ is the fourth and final song on the EP. It starts a bit slower before kicking into a catchy chorus, reaffirming the notion that the band is insanely talented. It leaves you wanting to hear more from the band.