We took a listen to Vessel, the debut album from Post-Hardcore quintet, Cute Cute Death. Find out what we though inside… 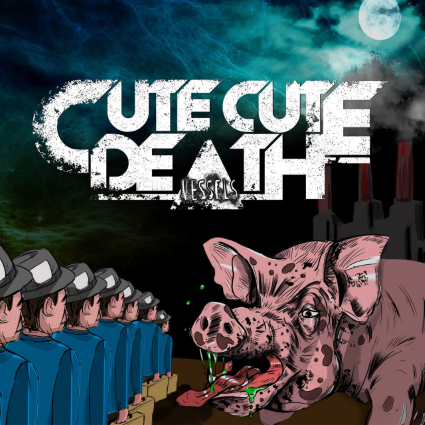 Before we get into the musical side of things, may we just acknowledge how Cute Cute Death have got to have some sort of award for most emo band name of all time right? If not, then can we please make that award a thing and send it to them? That would be a fun thing to do!

Anyway, back to business. Vessels is the debut album from this Brit Post-Hardcore crew, offering up ten tracks just perfect for the Warped Tour mosh-pits. Opening with it’s title track, the overall tone of proceedings is set nicely, with plenty of crunching guitars and angsty lyricism showcased with a blend of barely repressed screams and fluid vocals. There’s a sound distinctly akin to a more shouty Sleeping With Sirens that really pushes through the mix, but hell, that’s really no cause for complaint is it?

Pockets pushes up the anger factor to a more bubbly heat, blasting straight out of the gates at a hundred miles an hour. It’s here that the band really live up to their claims to hardcore, delivering a delicious cocktail of fearsome rage balanced with a sweet blend of fearful innocence in it’s sung passages. It’s a welcome blast from the mid/late-2000’s sound, when bands like From First To Last ruled the roost.

Seven tracks in, Statues pulls a new rabbit from the hat in the form of a more restrained, acoustic offering. Melancholy chords strum as the soundtrack to some lyrics pulled straight from the deepest recesses of front-man Niko Forster’s inner-most psyche. It’s aching beauty bleeds straight from it’s heart, the new anthem for a thousand teenage heartbreaks? It’s lyrics seem open to interpretation, with no blatant meaning forced onto the listened, meaning that everyone can find their own meaning within.

Coming towards the end of the proceedings, Leave This City seems to slide into a more radio friendly rock sound. The screams are lost for the most-part and a small amount of the fury that made the previous tracks so sweet yet agonising has departed. Yet still the quality of music remains undiminished, simply shimmying to the side and onto a different piece of the same path. No worries though, closing numbers Glass Eyes and Dinosaur bring back the harder stuff, finishing us off with a rather fabulous happy ending (it is only upon reading back through that I realise how utterly smutty that sounds).

Overall, this is one hell of a debut for a band who have gained themselves a solid reputation and an even more solid fan base in recent times. Could this be the start of something bigger? Damn right it could be! Let’s just hope that future releases stay as consistently good as this one. There is not telling what the future holds for these five gents.