The Raven Age are a band who have had a lot of high praise laid upon them in recent years, including being hailed as one of next big hopes in British metal. They certainly have ambitious credentials, creating and releasing their new album Conspiracy almost entirely DIY and through their own label Corvid Records. Conspiracy also promises the continuation of an epic storyline centred around the ravens in the Tower of London. Is the hype surrounding The Raven Age something they can live up to? 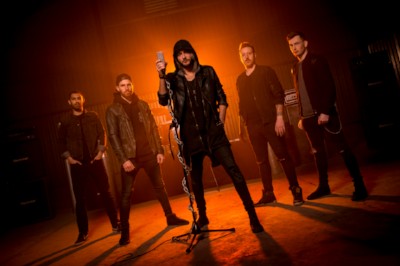 With all the buzz behind this band, I was expecting to dive into a really awesome album full of twists and turns. However, I was kind of disappointed to discover an album that focused entirely on metalcore and alt-metal cliches. The riffs and melodies are all things that I’ve heard a thousand times before from bands like Killswitch Engage and All That Remains. The underlying concept, promising an epic and immersive storytelling experience, instead sounds like a bunch of lyrical cliches that have a lot of style but very little substance. The album’s saving grace musically comes in the form of the 8 minute long closer Grave Of The Fireflies, a song that provides great contrasts of light and shade as well as some brilliant vocal performances from their new singer Matt James.

In spite of all its musical flaws, Conspiracy is an album that has been very well produced. Every instrument sounds clear and crisp, there are some lovely orchestral layers supporting the main thrust of the band and is sonically slightly rawer and more ‘alive’ than I would have expected a big, epic concept album to be. It’s just unfortunate that this great production sounds at times like it is propping up something that is musically underwhelming.

Instead of being a bold and ambitious statement from a new and interesting band ready to make their mark on the world, Conspiracy honestly sounds more like an overblown mess. It does however show some real promise in the form of the epic closing track and the album’s production is absolutely top-notch overall. It seems like The Raven Age bit off more than they could chew in the process of making this album, but the fact that they have attempted to do as much themselves as they have is really commendable. Hopefully their future releases will be more like the hype that they carry behind them than the reality of what Conspiracy ended up being.