The Homeless Gospel Choir ‘This Land Is Your Landfill’ album review

While I appreciate the sentiment in ‘This Land Is Your Landfill’, the new full length from The Homeless Gospel Choir, there’s very little musical value in these thirty four minutes. 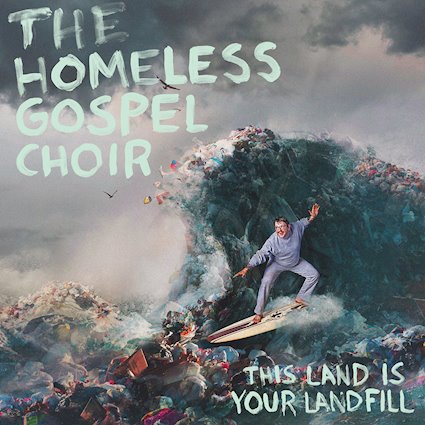 Opener ‘Global Warming‘ is nothing short of annoying, with hammered-home “ba-dah, ba-dah”s really putting the nails in the record’s coffin before we’re even two minutes in. Lyrics conveying such environmentalist messages should be either creative and poetic or at least, if uninventive, aggressive. Yet, this record contains gems such as “Donald Trump thinks global warming was invented by the Chinese”. Are these lyrics or clickbait headlines?

The thing is, every song ever released is going to appeal to someone. Shoddy lead single ‘Art Punk‘ has itself nearly 30k Spotify streams, so people are clearly digging it, and I’m glad. I can’t take it away from them that this record is from the heart, because it is. They did what they want and they did it how they wanted to, and that’s exactly how music should be.

The problem lies not with the artist, but with the art. ‘Social Real Estate‘ gives us another delightful lyric: “behind their bullshit twitter feed”. It just doesn’t sound right! I find myself cringing at least once during each track. Thankfully, at just over half an hour, the record doesn’t overstay its welcome.

I’ve always loved the sentiment of punk. People in a garage forming a band despite barely being able to play, just because they have something they desperately want to say. I’m behind that, and I’m even behind the environmentalist and socio-political messages of this record, but it’s terribly done. Even emotional pace-changer ‘You Never Know‘ sounds like an old Robby Takac sung Goo Goo Dolls outtake. The whole album is whiny, complaining about problems from the environment to the internet, a musical finger-point at absolutely everyone. That’s wonderful, but what are we supposed to do about Donald Trump thinking China invented global warming?

Put it this way, this record made me want to litter.