George Scott had a listen to The Endeavour’s EP ‘Voyage’ and love it. Find out why George thinks this quintet from Peterborough are definitely worth checking out! 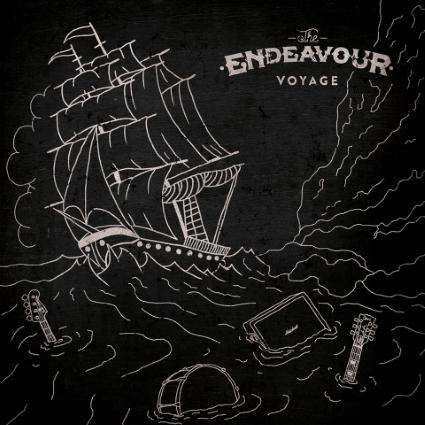 Ever heard an intro track that just makes you want to throw all of your lovely gear off a ship? If not, check out The Endeavour’s debut EP, ‘Voyage’, for fat, sing-along choruses and riffs to make your arms swing uncontrollably.

Take It All builds in to the EP perfectly, creating excitement from the get-go with one of those lovely octave heavy intros, and is followed up by Shawn’s massive, powerful vocal, forcing the sound further forward with raw power, and just as you think you’ve heard it all, the incredible intro track houses and absolutely incredible, jaw-dropping bridge that is bound to have people off their feet live.

The Endeavour just seem to create a wonderful, huge sound that would translate perfectly to a live show, and it wouldn’t surprise me if brothers Shawn, Brandon, Shane and Garren have spent countless sad, lonely, loveless nights perfecting the sound planning the band’s direction in order to get it absolutely perfect, and it’s looking like it’s going to work.
Similar in sound to British giants You Me At Six and Young Guns, there’s certainly a gap in the market for a catchy-but-heavy rock band like these guys, and it can’t be long before we’re hearing them storm the radio.

No One Else To Blame, the third track on the EP, is all about the chorus, which will have you singing way past the 100th listen. There’s not much to fault when a band like these show themselves, and we’ve seen it work so well so many times already.
There isn’t much to be said about 5 hard working lads who are preparing to take the British rock scene by storm except great, great things.
Vocally, Shawn is certainly aware of how to write lines that can’t not be sung along to, and the rest of the band consistently do nothing but respect that.

The whole EP and band seems well thought out, incredibly polished, perfectly produced, nicely mixed and absolutely ready to find its place among rock chart juggernauts and club circuit bands alike.
There is absolutely something in this band for everyone, from the strong, heavy intro to the enormous, sing-along finisher and I can hardly find a fault. The Endeavour know they’re catchy, they know they’re a rock band, and they’re doing a very good job of showing that.
I’m rating the EP with a 5/5, and can not wait to see these guys live in the future. Definitely worth checking out!