A common theme throughout the album is a prominent drum beat. Lyrically all the tracks have their own space in time. A very old-school Bring Me the Horizon feel to the vocals. The tracks effortlessly flit from heavy to anthemic and back again, all in the space of single tracks. The guitar work throughout the 11 tracks is incredible and this is an album that the Australians should be very proud of! 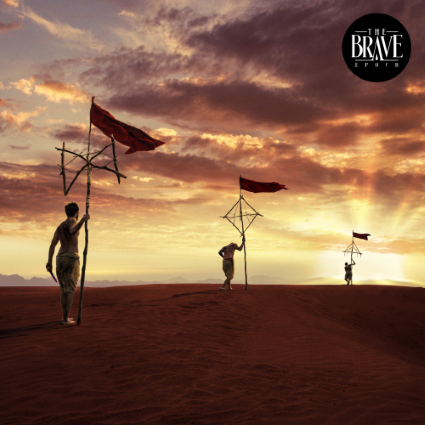 Since their formation in 2013, Brisbane’s The Brave have turned heads with their anthemic tracks. Epoch is their debut full length and is set for release on Friday August 5th via UNFD. Frontman Nathan Toussaint says “each song has its place in time. Whether they’re lyrically set in the past, present or future, they all share that same common theme.

“An epoch is a defining moment or event in time that leaves a memorable mark in history, and for us that is exactly what this album is. It’s a significant thing that has taken us from just being a local band having a bit of fun to a signed band with an album we are truly proud of.”

So is this album any good? In short; YES!

Opening track Searchlights is in the words of frontman Nathan Toussaint himself “Probably one of the more personal songs on the album, which I wrote about the loss of my cousin Ryan in 2007. It was such a defining moment in my life that changed not only my life, but the lives of all of my family forever. It was such an emotional song to record, and at times I found it hard to actually get the words out, but I’m really happy with how it turned out. It holds a really special place in my heart.” Emotional is sure a word to describe it lyrically. This is a track that is certain to give you goosebumps even while it is heavy. It has a prominent drum beat and the contrast between clean and scream vocals works well. Ending the track with the repetition of “I know you’re dead but you’re always with me” really finishes the track off nicely and will make the hair on the back of your neck stand up.

The opening guitar work of Eclipse is gritty. The scream vocals throughout the chorus perfectly overlay the cleans to make a haunting echo type sound. Dreamless features Marcus Bridge of Northlane and talks about Nathan’s insomnia. A heavy track that is beautifully contrasted by the smooth vocals in the chorus. The collaboration with Marcus for this track was very well thought out.

Ignited Youth is a song that is very relevant to today’s world, with themes of the effect of global conflict, something that we are all in the midst of. A heavy and angry track with a great melody and breakdowns. One that will definite translate well live, sure to start several pits. The spaced out piano intro of 1945 is in complete contrast to the rest of the album so far. With some ‘woahs’, it has the sing-a-long anthem feel. A very melodic, piano-based track that is more of a ballad with the vocals building up from some smooth cleans to Oli Sykes-esque screams. The track ends abruptly. Normal service is resumed with the heavy beat and riff work of Escape. Title track Epoch is a 30 second calming instrumental before the heavy returns with Legacy. Closing track Slipping Away opens with a good melody before a short riff. The track sums up the rest of the record, by combining the melodic elements, breakdowns, smooth and rough vocals and riffs.

A common theme throughout the album is a prominent drum beat. Lyrically all the tracks have their own space in time. A very old-school Bring Me the Horizon feel to the vocals. The tracks effortlessly flit from heavy to anthemic and back again, all in the space of single tracks. The guitar work throughout the 11 tracks is incredible and this is an album that the Australians should be very proud of!