Temples have just released ‘Volcano’, the follow up to 2014’s Top-10 album, ‘Sun Structures’. ‘Volcano’ is a beautifully crafted 60’s psychedelic dream journey, and I am in love with every single song. Genuinely, the album is up there with my all time favourites. This album varies on psychedelia with elements of acoustic, rock, and pop, […] 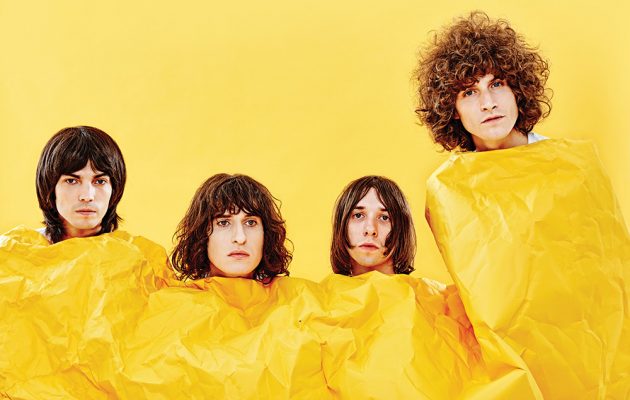 ‘Volcano’ is a beautifully crafted 60’s psychedelic dream journey, and I am in love with every single song. Genuinely, the album is up there with my all time favourites. This album varies on psychedelia with elements of acoustic, rock, and pop, featuring call-backs to The Kinks, Pink Floyd, and David Bowie.

The album opens with ‘Certainty’, which they released as a single late last year. You can immediately tell how much the band have progressed with their sound. They’re using different and more impressive production techniques, and their sound has evolved to include more synth and psychedelic elements. They’ve still got a knack for writing catchy riffs and hooks, and the first track leaves you hungry for more.

‘All Join In’ sees the band exemplify their skill for writing catchy riffs even further. The vocals are delicate over a slightly heavier guitar and synth, and it’s just a great song to bop around to – even if it does remind me a little bit of the Doctor Who theme song. ‘Born Into The Sunset’ is another great tune like this with synth melodies emphasised and brought to life by great backing vocals.

‘Oh The Saviour’ sounds like it could be on ‘Something Else by The Kinks’, and there is absolutely nothing wrong with that. It calls back to their more acoustic sounding songs on ‘Sun Structures’, before becoming something of a psychedelic explosion in the chorus. This song is the perfect example of how they updated their sound; taking what people loved about ‘Sun Structures’ and adding to it. ‘In My Pocket’ is another call-back to their debut, and it’s much welcomed with its acoustic guitars behind harmonies and a more 60’s production style.

‘Open Air’ is probably the most upbeat song on the album, with fast and punchy drums, a little more rock’n’roll influenced. With lyrics like ‘I want to live/ don’t want to die’ and positive vibes, the song makes you feel like it’s summer, and has me wanting to see these guys at a festival.

‘Roman Godlike Man’ is so Bowie and Beatles influenced (the vocal style, especially), it’s a Godlike song, and I love it. It’s another song that you can’t help but want to get up and move around to. The ‘fa fa fa fa fa fa’ chorus is a stand out – proving that you don’t have to have particularly intelligent lyrics for a song to be wonderful. It’s got a groove to it that you really can’t beat.

The album closes with ‘Strange or be Forgotten’, another song they’ve previously released. This one is the same sort of more psychedelic than 60’s rock song that ‘Certainty’ is, but it’s great nonetheless. The lyrics are awe-inspiring, and the song’s every bit as catchy as everything else on the album.

All in all, it’s wonderful, and you’re better off with the album in your life.