Canadian band Hollerado warm things up in the Brixton Academy as a stomping opener of a gritty rock band. As a band not overly familiar in the UK, noticeable by the lack of crowd singing along, they are sure to gather more of a fan base after this tour with a respectful crowd gradually getting […] 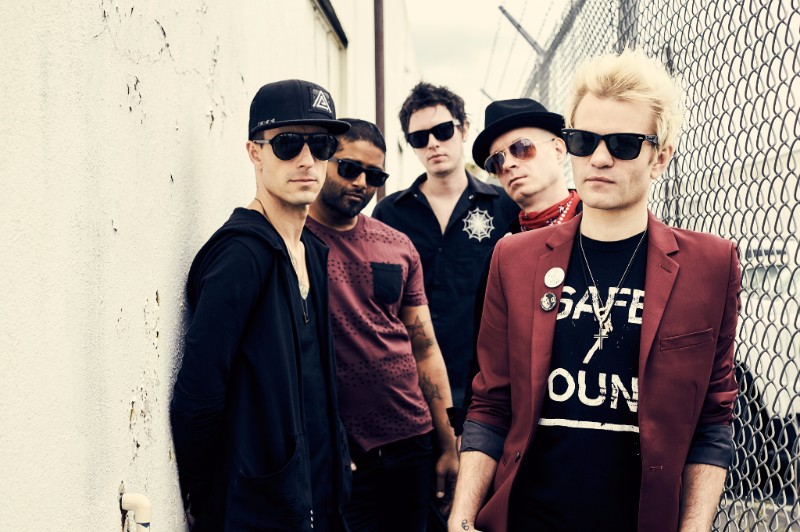 Canadian band Hollerado warm things up in the Brixton Academy as a stomping opener of a gritty rock band. As a band not overly familiar in the UK, noticeable by the lack of crowd singing along, they are sure to gather more of a fan base after this tour with a respectful crowd gradually getting behind them, as they thank Sum 41 for giving them this opportunity. With some technical issues mid-set, they composed themselves well, and thanked the crowd for coming out early to give them a chance.

As the wait begins, a white curtain is raised in front of the stage, gig goers use lights on their phones to project hand jesters onto the huge banner to keep themselves entertained, as tracks play through the house speakers of classic hits from the same era as prime Sum 41.

Greeted with a mix of sounds from demonic like speeches, hip hop, and an array of deep electronic sounds, the curtain falls as strobe lights flash as Sum 41 open with A Murder Of Crows as a sea of clapping from the crowd engulfs the Brixton Academy. Promptly leading into Fake My Own Death which sees the barriers in the centre of the room not making a difference as the crowd go nuts.

They follow up with a quick speech of the sold out show tonight as red and white confetti rains when Hell Song kicks in and mid song Derrick brings 3 fans from the crowd, to watch the entity of the show side stage. The crowd full of energy, beers spilling everywhere (even towards the back, as I became victim to this) a dozen beach balls launched into the crowd stating they are for a special occasion as the band celebrates 20 years. Derrick emotionally opens up about his life-threatening past, while talking about how War was written for the Sum 41 family who helped him get through this time in is life.

Moving on is the more recognised, motivational song (pun intended) Motivation, as the crowd get back to movement and everyone becoming a lead singer. All To Blame continues to rally up the voices of the audience, as the chorus has arms swaying side to side. Brixton Academy gets lit up as everyone holds up their phone lights to Walking Disaster, making it brighter than the house lights could. Mid song of Makes No Difference sees Derrick relocate to the sound desk at the centre of the room, staying for the duration of the next song With Me.

Returning to the stage for God Save Us All, still keeping the party going strong until the band walk off stage to leave us with the latest addition to the Sum 41 team, Frank shows off his drumming ability over a sample track, as the crowd back him until a huge set of inflatable arms raise behind him saluting the middle finger followed by a skull with glowing eyes as the Intro for Chuck into No Reason takes over the speakers. Following up with a cover of We Will Rock You and a solo duel between Dave and Tom. Still Waiting had the floor moving more than any other song so far, but not for long as In Too Deep had arms in the air, and a nostalgic feel for all attendees.

Sum 41 leave the stage but no one is ready to go home just yet, as screams for more gradually get louder. Derek returns to the stage alone with a piano to play Crash and Pieces back to back before raising hell with Welcome To Hell. As a final song, Fat Lip delivers as In Too Deep had done, for one last time, a nostalgic sing along blast from the past. Before thinking it is over, Tom takes over on vocals as Pain For Pleasure closes the night.

Sum 41 Don’t Call It A Sum Back tour has proven that in 20 years, they have not failed to impress a sold out show, and spot on performance as it is still clear they have it in them to keep going for years to come.