Stray From The Path – Internal Atomics

Political rabble rousers Stray From The Path return with their 9th album Internal Atomics. The hardcore four-piece from Long Island have come along way since their beginnings at the turn of the millennium, and this latest release sees them hit new heights. 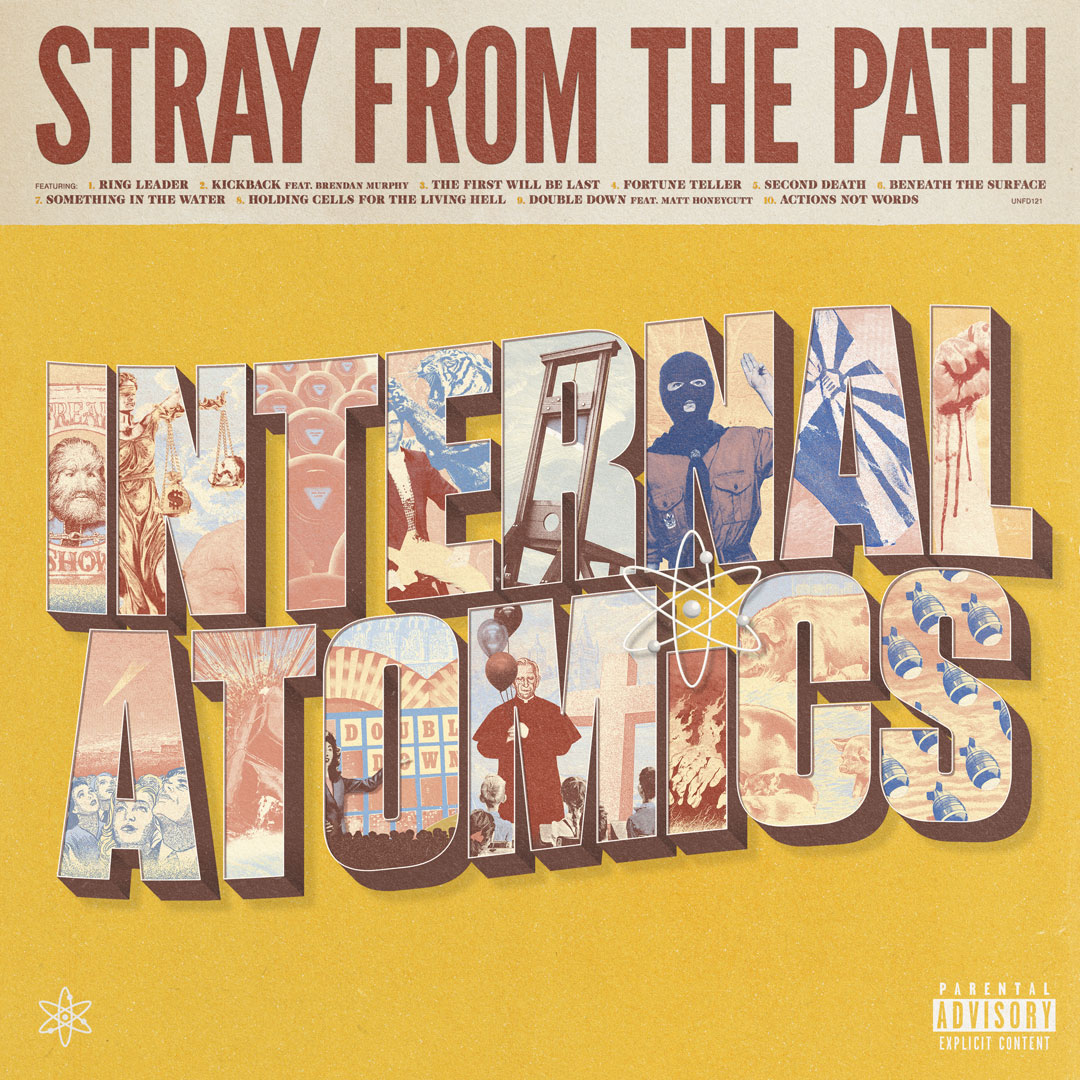 Some bands deal in complex lyrics in order to take shots at their targets when engaging in political song-writing. Stray From The Path are not on of those bands. They serve up blunt statements spat from the mouth of Drew Dijorio, delivered with all the rage and venom they deserve.

From the opening repetitive pulse of “Thinking like everyone else is not really thinking” on Ring Leader, this is an album jam packed with sloganeering and big brash statements, everyone of which could appear on the back of a t shirt. Yes, this can sometimes feel like they’re packing as many tattoo-able and printable statements into a song as possible. But when Dijorio’s delivery gives every statement the weight and meaning it does, it doesn’t feel cynical, it feels like a band that truly believe in what they are saying.

From the simple ”Bullshit!” of Kickback to the Exorcist quote “The power of Christ compels you!” and unbelievable power of “Where will you be when the fucking cross falls?!”, both of which appear in Second Death, every mosh call feels like it will see crowds destroying themselves in their aftermath on the live tour. The latter song sees the band take aim at the Catholic Church and it’s record of abuse, with devastating effect.

And it’s not just broad strokes attacking political and religious bodies, this album also sees Holding Cells For The Living Hell paint a vivid, and at times unsettling picture of mental health issues. The song appears to detail the fear of knowing a family member who is struggling with these issues, and the terrible toll it can take on the sufferer and those around them. It’s certainly one of the stand out moments on this album.

But it’s not just the lyrics that stand out on this album, every member of this band stands out in this release. The strangely twisting pull and push of the riff at the beginning of Something In The Water is one of the most wonderfully eclectic lead ideas you will ever here in metalcore, and it is led from the intro to the rest of the song by a masterful drum fill, one of many. The drum sound across this record, and SFTP’s career in reality, is excellent, a taut throbbing beat that is never lost in the background but never overpowers proceedings either.

Away from the skins, the cymbals ring out in the opening to Kickback before a grinding bass tone kicks in and drives this riot starter along. The bass can sometimes be an overlooked instrument, but not hear where it really does feel like it perfectly anchors the jumping guitar lines to the drums pounding.

Stray From The Path garnered mass attention two years ago when a popular far right Youtuber posted a video criticizing their excellent single Good Night Alt Right. That was certainly how I came to be aware of this band, despite the fact that they released their debut album approaching two decades ago now. Hopefully, that poor attempt at discrediting a marvellous song has brought more than just me into the fold and more ears and eyes will be on Stray From The Path to hear the absolute barn-stormer that is Internal Atomics.