A sold out crowd tonight, which was to be expected from Simple Plan‘s only UK headline show commemorating a 15 year milestone of the debut album No Pads, No Helmets, Just Balls. First up are local Londoners The Bottom Line who have become quite the addition to the Pop/Punk tours running through UK/EU, while honing […] 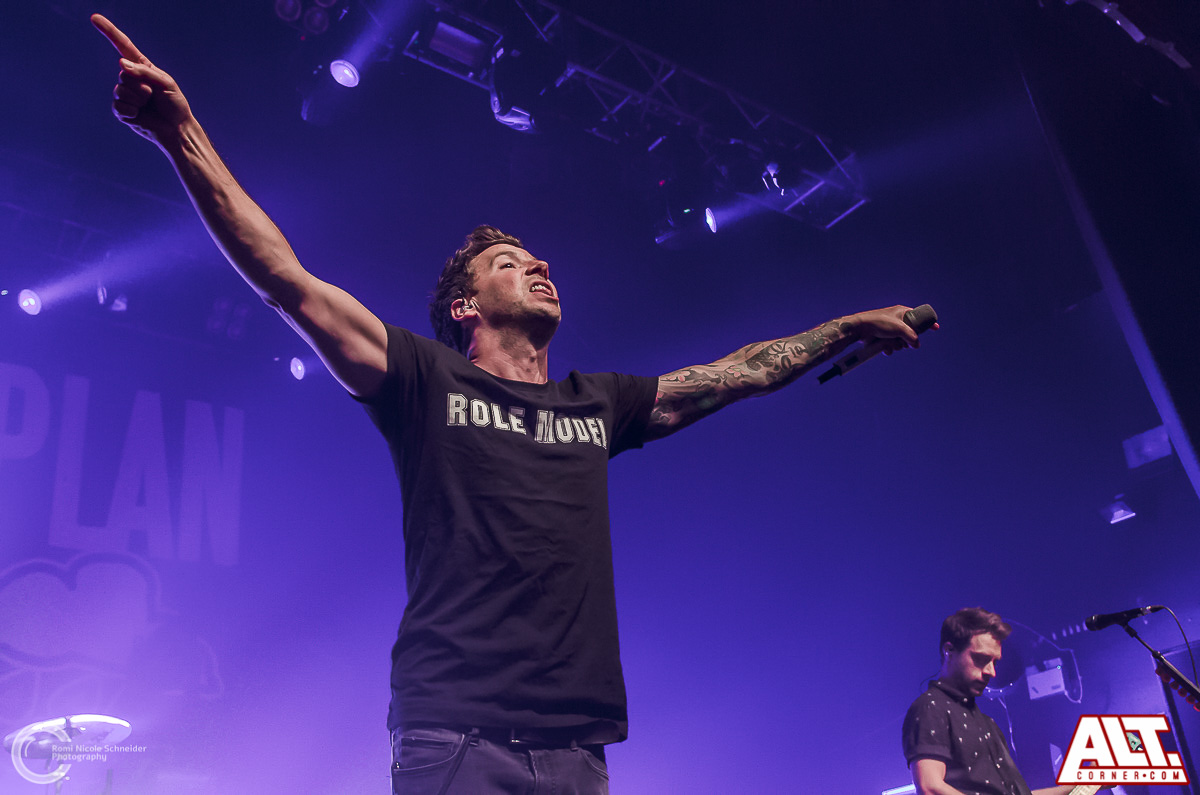 A sold out crowd tonight, which was to be expected from Simple Plan‘s only UK headline show commemorating a 15 year milestone of the debut album No Pads, No Helmets, Just Balls.

First up are local Londoners The Bottom Line who have become quite the addition to the Pop/Punk tours running through UK/EU, while honing the honour of supporting Simple Plan for two consecutive tours. The crowd given just as much energy as the band put into their set, starting the party off with a boom. Towards the end of the set sees a homemade ‘TBL’ Basketball hoop making its way until the centre of the crowd, as Callum (vocalist) calls out Pierre of Simple Plan to take the challenge of sinking the basketball in a Canada vs GB stand-off. Missing on his first attempt, Pierre picked up the 3 pointer on his second attempt.

After a fun warm up from local freshmen, Milestones hailing from Manchester head to the stage for their first UK show since taking on the US and European dates, bringing a ton of energy and passion into their set. Noticeably you can see that there is very few people who seem to have much knowledge of them but will leave their mark here tonight, as they play an impressively tight set of songs. Onlookers show their support between each song, getting a great reception which will no doubt leave the guys in Milestones gaining some new friends.

The last of the support acts Trash Boat also from just around the corner in St. Albans have also returned home after several weeks touring America announcing how great it is to be back home. Kicking things off heavy see some eyebrows raising in being the more fast paced punky addition to the line up here tonight. As the show moves on, Tobi (vocalist) asks for a raise of hands to who is hearing Trash Boat for the first time, as a surprising amount of hands are raised it goes to question, did anyone in the crowd even given the chance of sparing an ear to the support acts pre-show or just wanted the surprise of judging a live show? Regardless of the answer, along with Milestones, they gave it their all with 100% passion and raw punk rock grooves while the majority seem to be saving their 100% energy for the top dogs tonight. Closing the set with a speech of suicidal awareness due to it having an impact in his life, the crowd finally find themselves more behind the band as Tobi dedicates the last couple of songs to his Mother and Father.

The moment everyone was waiting for, the moment where my 28 year old self has no facial hair, as we go back to 2002, listening to one of pop punks biggest influential bands of the early 00’s play their debut album in full. For those aware of Simple Plan‘s debut No Pads, No Helmets, Just Balls, prepared for their favourite songs, readying themselves with phones for videos of tracks that never would usually make a live set as this rare opportunity is taken advantage of. Opening with I’d Do Anything just like the track-by-track entails, the only fault I could find is that Mark Hoppus didn’t make a special guest appearance to sing his part. What more do you want me to say? Simple Plan are nailing it, that would of just been the cherry on top. The atmosphere tonight is incredible, as I look around and see younger generations listening to an album probably born in the same year as them, as well as an older generation reliving those teenage years, everyone is singing along to every word of every track. The energy given from the band also shows they have no signs of ageing bouncing all over the stage, front of the barrier, and even the fun and immature jokes of how most of the crowd had to ask for parents permission to attend a Simple Plan show a decade and a half ago in comparison to nowadays being able to say “Fuck you Mom, I’m going to the Simple Plan show!” classic nostalgia fills the room reminiscing on their first experience of the band. Beach balls fill the building mid set, as Pierre signs one and throws it back into the crowd which left everyone fighting for it when it came close. As we come to end they decided to change up the last couple of tracks, by playing Grow Up before Perfect, seeing Pierre and Chuck (drummer) switch places showing they both have some additional talents, as a stage dive from Chuck during Grow Up. Phones used as lights fill the room as the start of Perfect begins and everyone is singing their heart out for the last track of the album. The band leave the stage with an obvious call for an encore, nobody is ready to leave just yet.

Returning for another half a sets worth of fan favourites, Shut Up is up first which is the opening track to the follow up album Still Not Getting Any, at this point I was being a bit too optimistic that the album would then be played in full, maybe next time. Energy is still flowing as Jump gets everybody off their feet, following into Boom! which Pierre stopped soon into the introduction due to a fan fatality. As the band wait patiently for the fan to be recovered by the paramedics, they have already used their confetti blaster on the first attempt of Boom!. Still getting great response from other hits Your Love Is A Lie, Summer Paradise and Jet Lag they close up the set with Welcome To My Life, people in attendance have got their monies worth witnessing a huge set including the debut album in full.

Now that show is over, I’m back in 2017 at 28 with facial hair, but still buzzing like the teenager I once was when attending these shows. Simple Plan will always hold a place in my heart as one of the best live performances, and I hope to see another future anniversary tour when Still Not Getting Any has a milestone birthday.