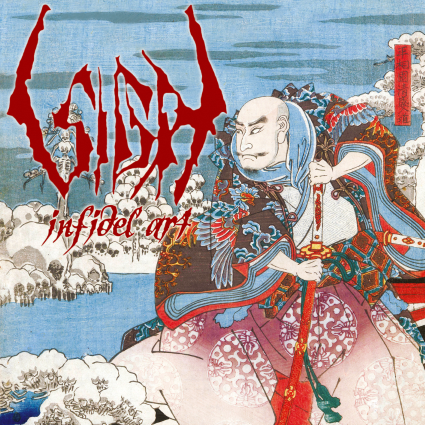 Have you ever heard the term “Japanese Extreme Metal pioneers”? No? Well, if you’re curious as to what it means, then take a listen to Infidel Art by Sigh, due to release on November 18th.

The first track of the album is Izuna. Izuna starts out slow, but suddenly speeds up thirty seconds in. There’s also a lot of amazing instrumentals, which you’ll hear a lot more than vocals. It’s a fairly long track, up to eight minutes long, but with such variety in instrumental parts and vocals, it doesn’t drag. For example, one part of the track will be speedy with fast vocals, and another part will be much slower with clean vocals. For a track that’s eight minutes long, it certainly takes up that time well.

The second track is The Zombie Terror, which I believe would set the mood for a zombie apocalypse. Also, the vocals sound a ghouly and zombie-like too, adding more to the mood and atmosphere this track aims to convey. Once again, we have a long track that uses it’s time well with different styles and moments, rather than something repititive. It’s a shame this track won’t be out by Halloween.

Next up is Desolation. This one begins with an introduction of chimes and what sounds like a lute (or something of the sort). However, instead of jumping right into the metal like most, we get a few lines of orchestral instruments following the same tune. It adds a little symphony to the track, which goes together amazingly well with the metal sound. It’s no surpise that symphonic metal has become a genre in itself.

Last but not least, we have The Last Elegy. Unlike the last few tracks, this one begins with a rather pleasant melody from some strings and flutes. Even when the usual metal instrumentals take over, there are still moments where the flute makes an appearance. I bring this up because I can’t say I’ve ever really heard the flute in a heavy metal song before, so that’s definitely a first.

I’d say the best way to describe this album would be that it’s got a lot of variety in its tracks and rather unique in its own way. While you still get some hardcore metal instrumentals, you’ll also get a few orchestral parts, that while unsual, fit in well. It’s a strange, yet unique-sounding album.