A very emotional night but it showed that FVK are going to go on and have plenty of success in their future ventures. A very good festival overall which organiser Adam Tibbs should give himself a pat on the back for! Now to count down the days until the next Shield Fest! 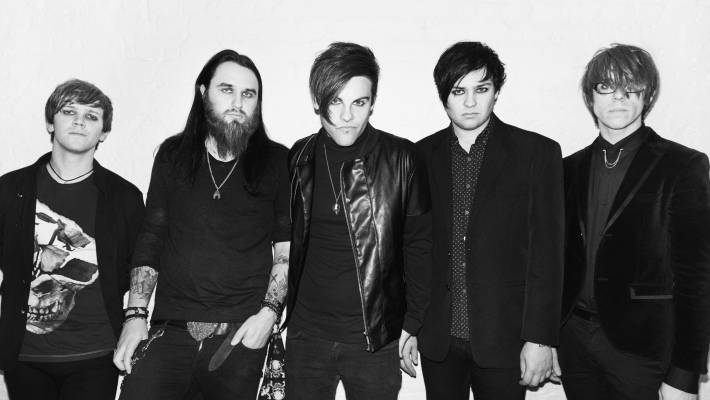 Bridgend is the location for the second Shield Fest. I arrive at Hobos to find a small queue of people covered in talc reminiscent of the 2012 FVK era. The reason for this? The aforementioned band recently announced a split and this is the only performance (confirmed anyway) that the band are doing from their already booked gigs.

First up is Calling Apollo, the Cardiff rockers got off to a strong start, enticing more of the wandering crowd throughout the set. Birmingham’s Coast to Coast were in their own words “different to the rest of the lineup” but put on a very good set.

Pontypridd electronicore act Clear the Auditorium are another band calling it a day, using the Shield Fest platform to go out with a bang. A strong set from a talented group of young musicians who it is sad to see go. There is a sing-a-long throughout with some of the band’s loyal fans turning out to send them off in style alongside several FVK fans who had seen them previously share a stage.

Essex/Hertfordshire post-hardcore/metalcore quintet Far From History grab the attention of the constantly filling room with their energetic set, banter with the crowd and great vocals from the frontman. Rockers Veridian have only been together for a few months but are already making waves. A very strong set from the quartet, beggaring belief that they are a band who are less than a year old! They know how to interact with the crowd and have very talented musicians. Port Talbot metallers All To Ruin put in a tight performance.

Welsh pop-punkers Junior make sure that all eyes are on them during their set with their energy and dual vocals on point! The trio play through some of their JuniorLand EP, including A House That’s Not Quite Home. There’s also a new track played, which the trio had great delight in teasing that there is a guest vocalist but wouldn’t say who (boo you guys!) A mid-set game of limbo with a mic lead ensues, with bassist/vocalist Mark Andrews leading the way (and also knocking my pint over afterwards – thanks dude!) A very tight set from a band I had personally been desperate to see ever since the JuniorLand EP landed in my inbox in mid-2015!

London-based alt-rockers More Than Most fill the main support slot. The quartet own the stage considering the majority of the crowd hadn’t heard of them, but left wanting more! Playing through their debut EP Impossible is Temporary including tracks Remember Who You Are, You’re Not Alone and newest releases Feed the Fire and Nightmares, the on-stage energy reflected into the crowd. Tight vocals came from both frontman Izzy Stylez and bassist/backing vocalist Mok Saib, providing a perfect build-up to the main event.

Finally it is a bittersweet moment as FVK take to the stage for the final time. Going into the festival, it was announced that the band would be splitting following the departure of co-frontman Kier Kemp and that the band would be performing as a quartet (Kierless Vampire Killers if you would). The transition from two frontmen to one frontman was expected to be tough for the crowd to handle, but from the minute they take to the stage, it was clear that this was going to be an easy transition! As Laurence Beveridge’s flawless vocal performance throughout the set showed, there isn’t a need for two frontmen. As the band played through old and new tracks including Could We Burn Darling, At War With The Thirst featuring our very own Mitch Emery (he also sings and plays guitar a bit too see!), Unbreakable Hearts and a completely solo version of All Hallows Eve alongside spellbinding renditions of what were Kier’s leads Bow Ties on Dead Guys, Maeby and Regret and an emotional rendition of Aging Love. There were tears falling everywhere and many fans held up signs saying thank you. Drummer Luke Illingworth showed us that stand up isn’t his forte with a corny joke, although it did lighten the mood.

A very emotional night but it showed that FVK are going to go on and have plenty of success in their future ventures. A very good festival overall which organiser Adam Tibbs should give himself a pat on the back for! Now to count down the days until the next Shield Fest!