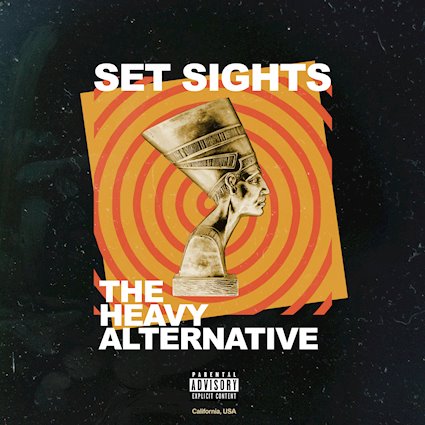 Orange County’s Set Sights are set to release their debut record Heavy Alternative via Tragic Hero Records. The band formed when drummer Griffin Werk and bassist Jay Chua consistently crossed paths with Maro Abdelmola at local shows in Orange County, CA. At the time, the band’s name was Set Sights For South but later shortened to portray their ambitious desires. Eventually, they got to know one another invited Maro to be the band’s vocalist. They began playing every show they could, quickly attracting audiences with their delivery of a positive message. Since then, they’ve shared stages with Senses Fail, Four Year Strong, and Defeater.

Set Sights believe their rap/rock fusion has come along way since the days of Beastie Boys and nu metal. According to vocalist Maro Abdelmola advocates that “both hardcore and hip-hop are about bringing people together; they’re positive movements” so when it comes to their own music, Set Sights strives to represent “a collective for anyone who wants to be bigger than themselves.

Heavy Alternative opens with “Rise Above”, bassist Jay Chua hits this like a Sick of it All jam. Set Sights brings alive the mentality of togetherness which a genre has achieved over many years. Maro fires out lyrics “Am I content living with a selfishness that tears away on the inside.” These guys paint pictures with words and let out energy befitting bands of this ilk.

Set Sights ransack the mind as Billy Sweet and Michael Garcia’s sweet hardcore riffs in “Planted” together with Jay Chua’s bass make certain areas tingle, all this from a tune that is only a minute and a half long. “Buried in Stone” explodes with an uncompromising wild mood and I caught myself shouting “No peace, no rest” (I’m not sure if that is correct but I’m going with those lyrics).

Griffin Werk hits skins like there’s no tomorrow on “Nostalgia” as a thing of hardcore beauty amasses with “Collapse”. The speed doesn’t let up with a touch of Suicidal Tendencies making my head rush.
Maro Abdelmola vocals are incredible, his hip-hop flow with an unclean voice works well. Lyrics throughout are engaging and don’t hold back, especially in “True North as Maro’s rap fusion is more perceptible.

A round of applause, a standing ovation for Griffin Werk with his continuous violent drum beats on “Dust”. I’m looking forward to seeing these guys continue this effort in a live setting. Heavy Alternative is an enjoyable debut record. There are times the record flows into each track, a need to double check if I’m on a different song was needed. Set Sights are reminiscent of UK hardcore upstarts, Blood Youth. This shows us the scene grows on both sides of the drink.