Set It Off at The Garage (London)

Will went down for a pre-Easter treat as Set It Off took to the Garage in London as part of their UK tour. 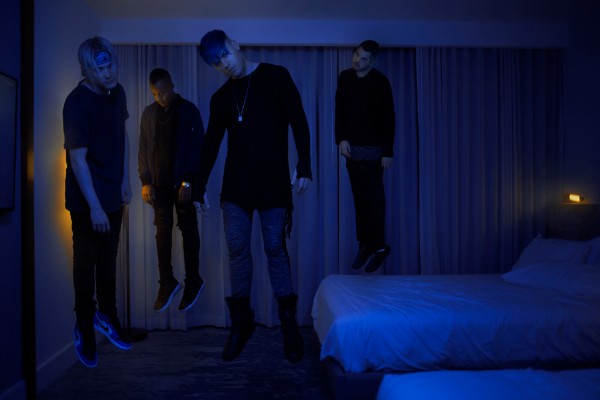 With the queue stretched into the horizon, the doors are open and Canadian quintet Bearings hit the stage 15 minutes later to an impressive sized audience. Grateful for the crowds early appearance and weather thus far, these guys’ first time in the UK has sure to put them on notice as eyes are forward and full attention has been given to the opening act with the mix of an energetic and chilled set.
Next up is Vukovi who deliver some hard hitting grooves and mysterious vocals that range in many tones, even when explaining having a cold is going to force them to do a shorter set than expected. Wasting no time in spending the duration of the set on the front barrier, deciding this isn’t enough and moving into the crowd with a box to stand on to get the full feel of the energy circulating the room and really warm up the crowd for Set It Off.
“2 minutes until midnight” a woman’s voice bursts out of the speakers with a ticking and low end background noises as the crowd grow anxious of the countdown and the last 10 seconds really rallies the anticipation. Set It Off take to the stage with Lonely Dance from their latest album Midnight, the crowd go mental while singing every word back to Cody and the rest of the gang.
Many songs from the latest 2 albums are played for the majority of the set, with such nice flow between each track, these guys are on a role with their latest album, the proof is in the fact they had sold out the entire tour before it even began proving Midnight is a clear success. Unopened Windows brings the emotional tension in the room as the song talks of his late father, as everyone lights up the room with torches on their phones while arms sway as Dan takes to the trumpet which was in fact previously owned by Cody’s father, what a great touch to the song. Following the tear-jerker it is time for some more positive vibes with Upside Down that sees more of Dan on Trumpet and Cody introducing his abilities on Saxophone. A huge drum solo shows off Maxx’s skills over various styles of genres which leaves people amazed as they stare at what feels like has become a Drum&Bass rave night. I was starting to realise a lack of early SIO songs, which then turned into something so unique I can’t recall ever seeing before live… A medley of their own songs with a whopping total of 9 originals including Dream Catcher, Ancient History, Forever Stuck In My Youth.
With the night still not done, Why Worry plays a huge part in the sing along’s that echo the room before closing on Midnight. 2 minutes of silence then leads to the bands return, as Cody explains how grateful he is that the music reaches so many people and this is only the beginning for them, while playing 2 more songs to close the evening including Partners In Crime.
A huge moment for Set It Off to sell out their first ever tour in its entirety, and it is truly deserved. The albums throughout have been great as you hear the evolving sound, and the live show is just as great with a whole ton of energy and passion.