Two years after ‘Gracetown‘, Australian quartet San Cisco are back with their third album, ‘The Water’, and a new early 80’s sound. The album opens with ‘Kids Are Cool’, and straight away you can see how this band have grown in the last two years. They’ve combined their summery indie-surf-pop-rock sound and wonderful vocal layers that […] 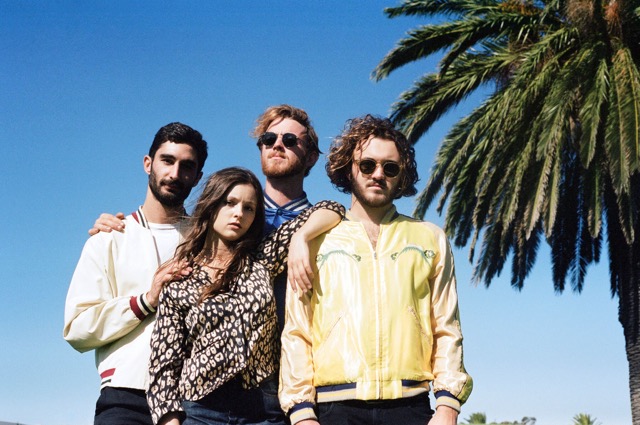 Two years after ‘Gracetown‘, Australian quartet San Cisco are back with their third album, ‘The Water’, and a new early 80’s sound.

The album opens with ‘Kids Are Cool’, and straight away you can see how this band have grown in the last two years. They’ve combined their summery indie-surf-pop-rock sound and wonderful vocal layers that we all fell in love with, with a more vintage sound filled with synth and funky bass riffs. This song is definitely more ‘Flashbang’ and ‘Fred Astaire’ than ‘Skool’ and ‘Golden Revolver’, but it’s just as good, if not better.

‘The Distance’ is very Bee Gees, and there is nothing wrong with that. It’s a song about a relationship, which seems to be a recurring theme throughout the album. Even ‘happier’ sounding songs which have you craving summer and all the good times that come with it, like ‘Sunrise’, ‘That Boy’ (“That boy ain’t good to you/ he’s breaking your heart/ and it’s breaking mine in two”), and ‘Hey, Did I Do You Wrong?’ have bittersweet tinges. If you’re going through a break up, this album is relateable and will probably cheer you up; but equally if you’re already in a good mood, the smooth summery synth sounds will have you happily grooving along.

The second half of the album is where (for me) the best songs are. ‘Hey, Did I Do You Wrong?‘ is a definite highlight of the album. It’s a call back to their self-titled debut, being a more acoustic song, talking about when “life was filled with salt and sun screen and nothing was ever that hard”. It’s a chilled out and laid back track, and it’s brilliant.

‘SloMo‘ was the first official single the band had released from ‘The Water’ (aside from B-Side, the b-side to this song, and a b-rilliant one at that), and it’s another highlight. With lyrics like “I slip up/ I know I will/ coz you are slick as an oil spill”, a bassline that is impossible not to dance to, and Jordi and Scarlett’s sweet voices, everything about this disco funk song is perfection.

‘Did You Get What You Came For’ is yet another amazing song. It’s the kind of thing you can imagine playing at the end of a coming of age film in a prom scene. The drums drive the song, before some slick guitar riffs steal the show, and with Jordi crooning “in time I’ll get over you” it feels like a nice resolution to all the previous lyrics about relationships. It’s a perfect combination of surf-indie-pop and old-school synth sounds, which until this point I didn’t see as a winning combination, but it really works.

One small downside is that this album doesn’t feature Scarlett on the vocals as much as previous albums, but the album is still definitely worth a listen.