When I first heard of Real Friends I was fresh to pop punk. I liked All Time Low, As It Is, Green Day and My Chemical Romance. I found their first two albums to be too brash and bordering on unlistenable. By the time Composure dropped I’d been to Slam Dunk Festival and, though I still believe their first two records to be poor, that third album really made me fall for them. ‘Stand Steady; is still their best song. 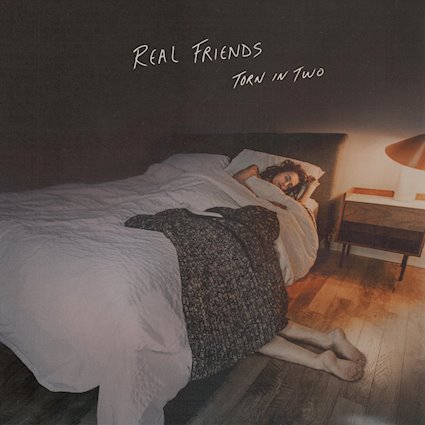 Now, Dan Lambton has stepped away and for a time it seemed the band were done. Nevertheless, here they are again with new singer Cody Muraro and EP Torn In Two, which is actually long enough to be an album were half of the tracks not just reimaginings of the first five.

The new sound is closer to the squeaky clean Composure than the gritty and frankly unpleasant Maybe This Place Is The Same And I’m Just Changing. Lead single ‘Nervous Wreck’ begins with plinky guitars and Cody’s much softer vocal and then gives way to a big and catchy chorus. It’s definitely what you’d expect from this band, with powerful and honest lyrics. Second single ‘Storyteller’, for me, is infinitely the better track. They’re treading new waters here, firing through a powerful alt-rock chorus with some more intricate and interesting instrumentation.

Opener ‘Remedy For Reality’, while bringing up feelings of being overly familiar, is a classic pop punk number with pounding drums and Muraro reaching into his throat for some powerful lines. The pace never lets up and the track is a statement of intent. However, the band are most comfortable on harrowing middle track ‘Teeth’, an acoustic number that really suits Muraro’s vocals. ‘Spinning’ comes afterward and, though a good song, feels a little underwhelming sandwiched between the EP’s two best songs.

Reimaginings (or reworkings, whatever word most tickles your pickle) are generally hard to do. As It Is’ The Great Depression Reimagined was awful bar three of the twelve tracks. Only Deaf Havana, in my experience, have ever done it to great success with All These Countless Nights – Reworked. Real Friends sadly don’t join this camp.

There’s nothing especially wrong with the songs. ‘Remedy For Reality’ has merely been tinkered with a bit, changing the instrumentation – but it doesn’t really bring much new to the table. In fact, from the outset you begin to wonder if this was done to fill space? The same can be said for ‘Nervous Wreck’. Poppier ideas have been added, the things the band wouldn’t dare to do on their standard songs. There’s a beat under the chorus that saps all power out of it and makes it sound more like a remix than a reworking. ‘Storyteller’ also begins well but the chorus is the letdown. All three end up dying in the shadow of the originals.

‘Teeth’, instead of billed as being reimagined, is down as a full band version. It makes for a nice listen. It isn’t as visceral as the acoustic original but a welcome addition, much like With Confidence’s electric version of ‘Paquerette’. ‘Spinning’ also sounds better in the more reserved, focused style.

Though the idea of being ‘torn in two’ permeates this release, going so far as to inform their decision to reimagine the entire release in a side A vs side B thing, you’re left wondering if fans would’ve preferred ten fully original songs in the same style as the first five. I would’ve, and I’m not even huge on these guys. Still, a decent release and welcome come back. A few for the pop punk playlist.