Well, direct support for Papa Roach is Ho99o9 who make themselves noticed with a pretty impressive sized banner but no real connection to this crowd. The energy on stage is there but the general combination of sounds in a hip hop and unpredictable and unclear metal fusion ideas fail to get a single person in […] 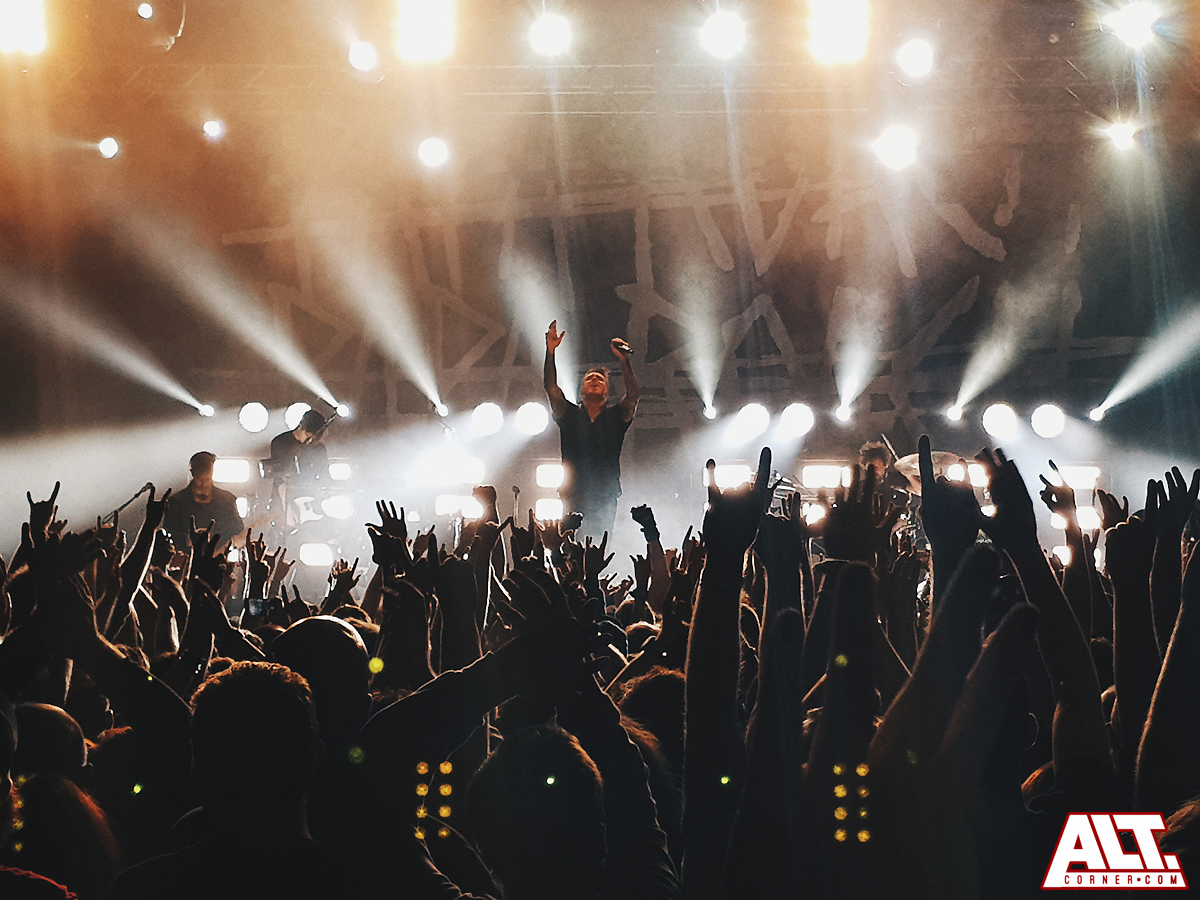 Well, direct support for Papa Roach is Ho99o9 who make themselves noticed with a pretty impressive sized banner but no real connection to this crowd. The energy on stage is there but the general combination of sounds in a hip hop and unpredictable and unclear metal fusion ideas fail to get a single person in the whole of Brixton Academy on board with what they are providing, not to mention the sound itself being very unbearable with a wall of bass ringing around the room and not a single word that is understandable.

The band everyone came to see, Papa Roach throw down a banner of the Crooked Teeth artwork while a hip hop track of their own blasts out the speakers followed by a “Public service announcement” requesting everyone to raise their fingers and say fuck Papa Roach as they take to the stage breaking straight into Crooked Teeth whilst the banner drops. Following is Getting Away With Murder which sees everyone moving and waving hands in time with the lyrics then taking us even further back in time Angels And Insects receiving the nostalgic feelings from everyone in attendance rapping along as Jacoby calls for the pit to open up.

A couple of new tracks are then played to promote their latest release as a live recording is made for presumably their next video release. She Loves Me Not is next up as everyone breaks into the groove of this classic track, filling Brixton Academy with the energy it has been looking for all evening but doesn’t compare to Scars which sees phones recording the most heartfelt track by Papa Roach, that every emo-phased being here will undoubtedly know every word. Further slowing things down with Periscope gives a little breathing space for anyone more central of the action who need to find their feet before a cover of Blur – Song 2 brings together more movement than there has been all night which seems bizarre not being an original track, regardless people are having a great time!

So Traumatic leads Jacoby to get everyone to get low before building out of the bridge into the final blistering chorus as the whole room jumps from the floor. Forever smoothly runs into Linkin Park – In The End as a big tribute and speech about Chester Bennington (RIP) giving everyone the security of knowing they are not alone and there is always someone to help and a phrase I can relate to, “music saves lives”. Lifeline continues the emotional show that is being put on tonight as the lights go down, and the final note rings out the band have left the stage as everyone eagerly and increasingly claps awaiting an encore.

The fans get what they want and deserve by playing None Of The Above, Dead Cell with a section of Thrown Away which led straight into Last Resort as everyone is led to believe that it’s all over (I mean, Last Resort you’d expect to be the finale right?!) the surprise of I Just Wanna Be Loved follows as the crowd scream out the lyrics for one last time ending with a bang as the night comes to an end. With over 2 decades as Papa Roach they are still bringing in the crowds as proven here tonight, there is many more years in the tank for them to continue as a heavyweight in the music scene.