New New Years Day record ‘Unbreakable’ comes after a dissatisfied band scrapped a tonne of songs and set out to write a new batch, all ready to explode and show both the band’s anger and pride. Costello wanted to go somewhere different, and she has. 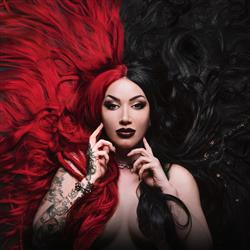 ‘Come For Me‘ opens the record, sounding a little like ‘Big Bad Wolf‘ by In This Moment. There’s that electronic element in the vocals, and it works for the song. However, the track itself is lyrically powerful, but not so powerful overall. Its a decent opener, but nothing special. ‘MissUnderstood‘ is definitely the better track, slowing up the pace before a massive, Halestorm-esque chorus. Lead single ‘Skeletons’ follows. This one reminds me of a heavier version of Icon For Hire and, despite being somewhat generic, is a decent song.

Title track ‘Unbreakable‘ introduces some atypical riffage and electronic elements, and is a decent anthem. A huge chorus hits you with a wall of sound, though the lyrics are somewhat uninventive (Costello did say she tries to ‘say what she means’ on the record – no metaphors. That plan hasn’t worked so well here). ‘Shut Up‘ is lyrically sensual and pleasing on the ears, despite being another anthem about standing up and fighting for what you want. This time we have pop vibes, and they work well.

‘Done With You‘ feels like it’s trying to be some form of electronic metalcore, and it certainly spices the record up. ‘Poltergeist‘ again spices us up, slowing the pace with piano led verses followed, sadly, by another big chorus. One can’t help but feel that this track wanted to stay as a slower one throughout. ‘Break My Body‘ and ‘Sorry Not Sorry‘ are two hard hitting rockers, the former certainly more successful, with the latter feeling like filler. Hell, by the time ‘My Monsters‘ rolls round, you’re a little sick of the overused formula throughout the record.

‘Nocturnal‘ changes us up a bit, and its welcome, but it’s still only an okay song. ‘I Survived‘, however, is a good track. It’s what you’ve been waiting for, and certainly the highlight of the record. An anthem to personal success, not differing too much lyrically, but certainly pushing a lot more musically. I like this song a lot.

Overall, is doesn’t exactly push any boundaries. New Years Day set out to make an angry, in-your-face album, and they did. The lyrics are a little boring and in need of the metaphors and ambiguity Costello wanted to avoid, and there overuse of the same formula grows a little tiring. However, there’s some good tracks and sing along pieces on here, done the New Years Day way. Fans wont be disappointed, but I don’t think there’ll be many new fans pouring in as a result of this release either.

It’s definitely like an amalgamation of Icon For Hire, In This Moment and Halestorm. You’ll see what I mean.