Knowing full well I was set for a loaded night of pop punk, at times with a sprig of hardcore added in, I decided the only worthy shirt for the gig was my As It Is one. Then, in classic broke pop punk fashion, I used the day ticket from my bus journey earlier to get to Leeds, thus not spending extra cash on the train. 20 chicken nuggets down, I strolled to the venue, prepared for a night of mosh pit observing/avoiding. 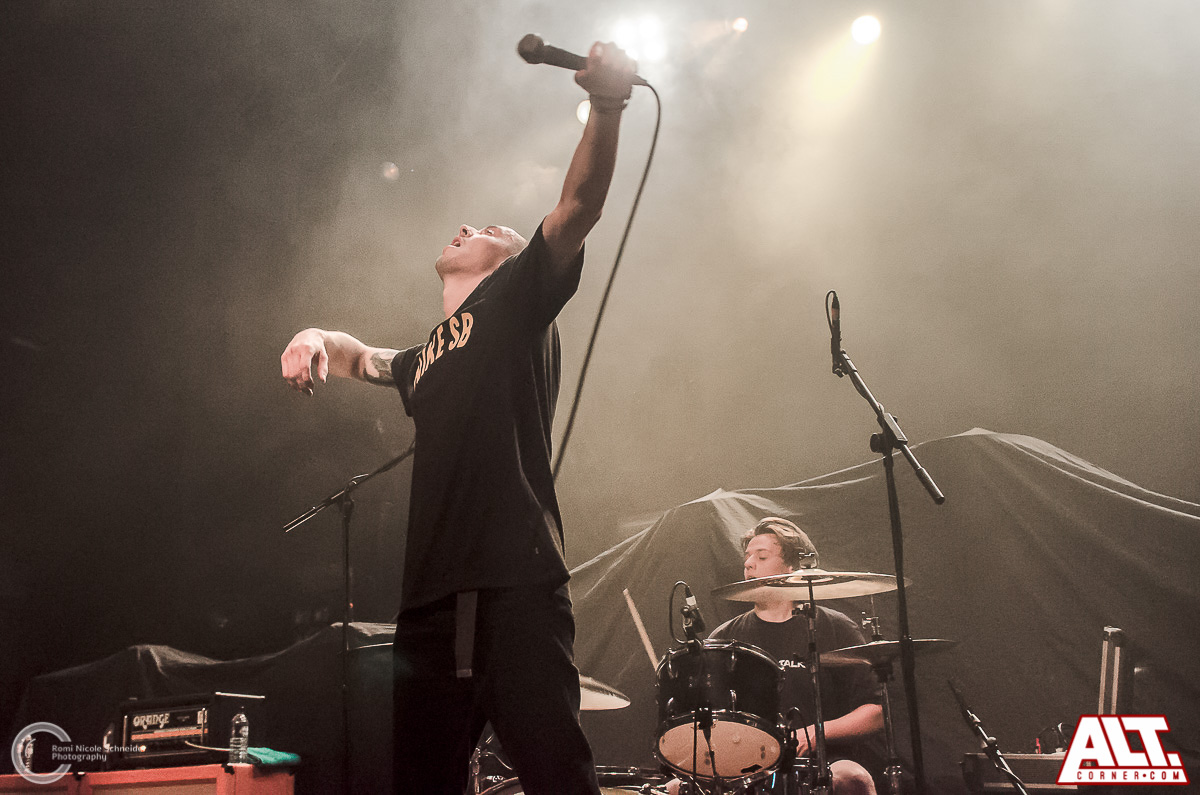 Woes took the stage to open the night and, frankly, owned the crowd for approximately half an hour. The room was only half full but the people who were there seemed impressed by the little pop punk outfit bouncing around the stage, necking buckfast between songs and generally having themselves a very good time. ‘Moneyshoe‘ went down a treat and, despite its rather childish catchiness, was the one that made me come home and check them out. If that isn’t ripping a gig successfully, I don’t know what is.

Doll Skin followed, just as much energy flowing through their members. Alex Snowden’s fingerwork on her guitar caught my eye right away; her soloing was as mesmerizing to watch as it was to hear. On stage they operated like a well oiled machine, feeding off each other’s energy and blasting it back out onto the crowd. The room was filling up by this point, I had a pint of Amstel, and Doll Skin were bouncing around the stage like women possessed. The anti-Trump speech particularly pulled me in at the end, and ‘Puncha Nazi‘ was an experience that wasn’t going to leave my head for a long while after, and I knew it. ‘Love Is Dead And We Killer Her‘, however, was the set highlight; power punk turned up to eleven

Capstan were probably the most underwhelming of the night, but perhaps that was because so many people had raved about them that I expected god tier performance from a band who haven’t even released their debut full length yet. Their set, however, was near flawless, with only really the fact the bass was turned up way too loud putting a dampener on the experience. An acoustic rendition of ‘Can’t.Lie.Around.Remembering.Everything’ slowed the night up a bit, and it was a welcome break. They did indeed provide the UK with “the full Capstan experience”. ‘We’ll Always Have Paris‘ remained in my head as well and, though his bass was too loud, the bassist himself had an amazing stage presence and knows all too well how to whip a crowd into a frenzy.

Usually, after three support acts, I ache. My feet, or my legs, or my back. And it’s a boredom ache. However, coming up to Trash Boat‘s set, I had no such ache. The intro of ‘Inside Out‘ played over the speakers and I headbanged my way through what I believe to be the greatest Trash Boat track. I headbanged my way through a few others too, I’m pretty sure ‘Shade‘ and ‘Undermine‘, to name a couple. I don’t usually move much at gigs, either, so that’s a pretty high compliment.

New single ‘Synthetic Sympathy‘ went down a treat. Duncan is an entertaining, energetic and engaging frontman, and the band operate brilliantly as a unit to bash out show after show, never letting up through their hour-and-a-bit set. Some oldies-but-goodies were thrown in there, such as the pounding rager that is ‘Eleven‘, meaning their live set has a little something for everyone. ‘Crown Shyness‘ is a better song live, too, so that was a nice surprise.

I haven’t been to a gig in a very long time where every single band impressed me. In fact, other than god-tier co-headliners, I don’t think there’s been any. Take from that what you will.