On Saturday November 11th, Jamie Lenman curated and headlined his own all-day festival, appropriately titled LENMANIA. The day saw an eclectic collection of British artists playing across two stages, The Dome and the Boston Music Room in London’s Tufnell Park. We went along to check out everything the afternoon had in store.   “Thanks for […] 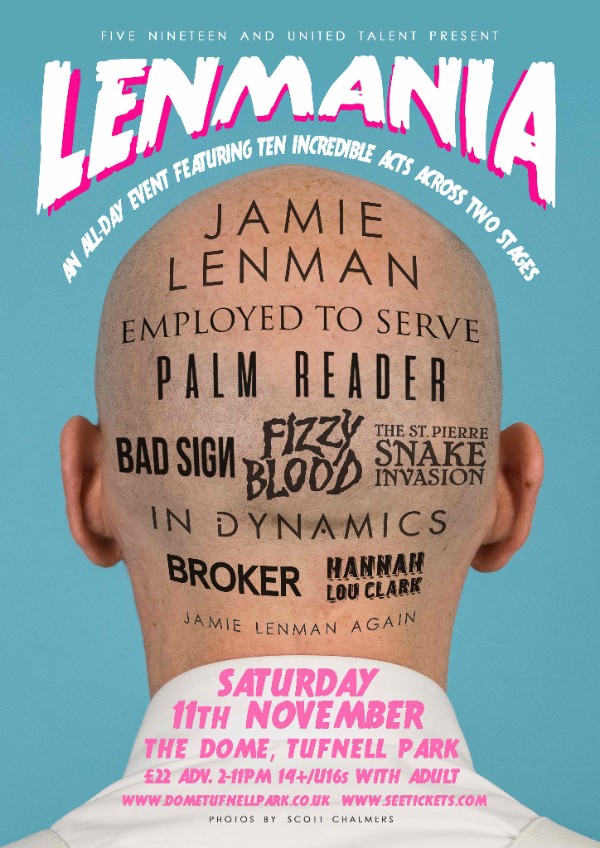 On Saturday November 11th, Jamie Lenman curated and headlined his own all-day festival, appropriately titled LENMANIA. The day saw an eclectic collection of British artists playing across two stages, The Dome and the Boston Music Room in London’s Tufnell Park. We went along to check out everything the afternoon had in store.

“Thanks for coming down early” exclaims a beaming Jamie Lenman to a Boston Music Room that is already full to the brim with thirty-year olds in faded Reuben t-shirts and teenagers alike. With a party hat on his head and an acoustic guitar in his hand he rattles through an assortment of both solo cuts and old favourites as well as a stirring cover of Madness’ ‘It Must Be Love’. He may be the only one on stage for the most part, but he brings enough charisma to fill a football pitch.

Upstairs in The Dome Brighton noisemakers Broker crank things up to eleven with a blend of hardcore ferocity and mathematical precision. They’re an excellent showcase of this stages superior acoustic quality and they seem hell bent on using their jagged riffs and pounding drums to push it to its absolute limit, they leave to a sea of faces as stunned as they are impressed. It’s like musical whiplash as singer/songwriter Hannah Lou Clark takes to the stage downstairs, initially she struggles to be heard over a crowd that’s at least four pints deep by now. However, she gradually encapsulates the room with heart-on-sleeve anthems of love and emotional vulnerability, her quiet charm and complexity is notable among the heavier soundscapes of the afternoon, and she’s doubtlessly made an impression on many of the punters.

No less passionate than downstairs’ acoustic sing-along but twice as venomous are Bristol natives The St. Pierre Snake Invasion. Lead singer Damien Sayell is a snarling personification of punk-rock spirit as he serenades his audience with the most versatile vocal performance of the day, his ear-piercing shriek leaving not one ear-drum intact. Such is his no bullshit approach that in-between tracks he calls out the gentrification and all-round snobbery of London and its inhabitants… in none other than the centre of London. Instrumentally their sound is equally as versatile, filling the room with their manic lo-fi riffing. “If you don’t know, now you know” says Sayell before they peel out their last abrasive cut of the afternoon, and he’s quite right too.

Alternative pop-rock trio In Dynamics take a more melodic approach as they grace the stage downstairs in the Boston Music Room. Their sound is a marriage of the progressive and the pop that plays well to the sizeable crowd that greets them. They’re easily the afternoon’s most accessible act but that doesn’t stop the odd sprawling soundscape from punctuating their raw emotionality. Singer Beau Boulden marks himself as a mighty impressive vocal acrobat as the set unfolds, this is a band who’ll have no trouble ascending to bigger stages in the future.

When Bad Sign vocalist Joe Appleford asks who’s never seen them before he’s answered by most of the people in the school disco-esque room that is The Dome. The Croydon three-piece proceed to introduce themselves the only way they know how, with a series of bombastic riffs and I don’t just mean riffs, I mean RIIIIFFS. Each one greeted with a louder cry of “OOOhhhh” than the last. There’s a no-frills approach to their songcraft that goes down a hit, particularly with a crowd that have spent years listening to Reuben, and they ultimately prove that if you have swagger and enough talent to back it up then you need nothing else.

If Fizzy Blood sound familiar to Jamie Lenman fans that’s because their name is taken from a song off his debut solo record Muscle Memory and the influence is felt in their raucous attitude. This Leeds’ rabble are evidently one of this afternoon’s most anticipated bands as the confines of the Music Rooms are stacked wall to wall with bodies. Their psychedelic slacker-pop is a welcome addition to an eclectic day of British rock music, simultaneously fuzzed up enough to sit alongside the heavier acts and anthemic enough to win over the uninitiated. So far, the Boston Music Room has lacked the energy of upstairs, but by the time they’ve finished their opener Fizzy Blood’s crowd are more than happy to get involved. There’s a party atmosphere in the air as they exit stage, a job well done.

If Fizzy Blood just got the ball rolling then Woking’s nastiest, Employed To Serve are about to set fire to that ball and slap you round the chops with it. A palpable sense of intensity follows this band and their deafening metallic hardcore everywhere they go, this afternoon is no different. There’s a tightness to their live performance that would leave even the most seasoned performers shaking in their boots, and the first few rows cathartically scream back every word to cuts from their barnstorming second record The Warmth of a Dying Sun. After numerous stage-dives, circle pits and a wall of death, it’s a wonder there’s actually a stage left for the acts who follow.

Keeping the intensity levels up on the stage below are hardcore powerhouse Palm Reader, who are greeted by a faction of adoring fans, drunkenly shouting back every word to their old favourites. The lighting aids in creating a heightened sense of atmosphere that culminates in the most captivating performance of the evening, by some distance. They take the opportunity to showcase some unheard cuts from their soon to be released third record, and although they don’t spark the same shout-alongs there’s hints at a very exciting future indeed for this Nottingham five-piece. They finish in just enough time to allow their sweat-drenched audience to run upstairs for tonight’s headliner.

Last but by absolutely no means least is Jamie Lenman himself (again), closing out the day’s antics with a fully plugged in set. As if his jovial charm wasn’t enough for tonight’s crowd, he’s come armed with an arsenal of tunes from throughout his career. Opening with recent singles ‘Hell in a Fast Car’ and ‘Waterloo Teeth’ it becomes clear from their reception that Mr. Lenman is regarded with so much more than mere nostalgia. That said, cuts from his days in Reuben like ‘No One Wins the War’ and ‘Stuck In My Throat’ are met with a rapturous applause unlike anything else from the afternoon. It’s his name on the poster though and he will do as he pleases, with the focus placed very much on his solo material. Employed To Serve’s Justine Jones joins the stage for a brutally satisfying rendition of ‘The Fuck of It All’, which couldn’t be further across the musical canvas from the danceable, and frankly brilliant, cover of Madonna’s ‘Material Girl’ that comes a song later. The audience responds with what can only be described as total and utter Lenmania to the thunderous rendition of ‘Mississippi’ that ends the festivities. This set turns out to be a perfect encapsulation of the musical enigma that is Jamie Lenman and the eclectic afternoon of music he’s put together. Same time next year then?