Opening up the first date of the UK leg of the Selective Hearing UK tour are South African born, London-based rockers New Volume. This is the trio’s 27th date of the run and it may as well have been their first with the epic performance they gave! While the crowd may have been a bit […] 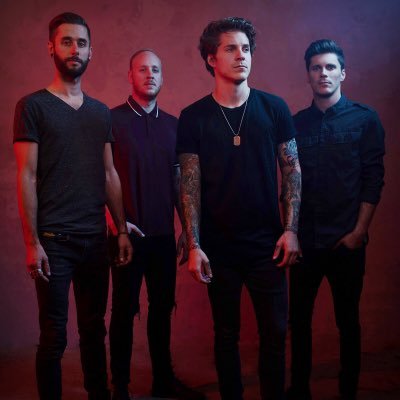 Opening up the first date of the UK leg of the Selective Hearing UK tour are South African born, London-based rockers New Volume. This is the trio’s 27th date of the run and it may as well have been their first with the epic performance they gave! While the crowd may have been a bit still, they enjoyed the set as the vocals were flawless and the guitar work was on point. Highlights of their set were Turn Off The Light and Lovers And Liars.

It’s day one of tour for Welsh post-hardcorers Holding Absence. The band have been making waves over the past year and from tonight’s performance it was easy to see why as they powered through tracks including Dream Of Me and Penance. It’s hard to put their performance into words to truly showcase it, all we can say is these guys are going to be big!

There was a bit of a setback for Our Last Night with drummer Tim Molloy breaking his foot in Amsterdam (those indoor trampoline places are dangerous kids!) However, that didn’t stop him from performing, teaching himself to use a two-pedal with one foot and being assisted by a pretty rad cane! As the band kick off with Broken Lives you forget about Tim’s ailment as he still performs great! There’s more energy than you would think coming from a tired band who are 27 days into a tour away from home, yet the only time they slow the pace down is for an acoustic rendition of Reality Without You. Pits open up in the center of the crowd throughout a set that not only showcases some of the best tracks on latest record Selective Hearing (we’re talking about you ivory Tower, Ghost In The Machine and Common Ground) but also an extensive list of hits from an impressive back-catalogue!

As many people know, Our Last Night regularly post cover videos to their YouTube channel so it was obligatory to include one to the set, with 2017’s most popular cover Shape Of You by Ed Sheeran being given the nod. Bassist Woody Woodrow finds the easiest way to the bar is to crowd-surf there mid-song. The vocals throughout are flawless with the way Trevor and Matt’s harmonies mix together added to by Trevor’s harsh screams. There’s a moment of reflection towards the end of the set with Trevor thanking the crowd for their support over the band’s fourteen year career (yeah its insane to think they’ve been a band for 14 years, doesn’t time fly!) before a heartfelt rendition of Sunrise bringing the entire room together to close the encore.

A lot of people are saying online about how Our Last Night have gone from being a metalcore band to a covers band, while they do post a fair amount of covers (which is a pretty good strategy to gain new fans), this tour proves that that is not actually the case and that their back catalogue and recent record are even more impressive than the covers. The only issue with the night was the fact that A World Divided wasn’t in the set, but hey, you win some, you lose some!