Issues haven’t completely shed the skin that is metalcore on new record ‘Beautiful Oblivion’, but they’ve certainly moisturised it with some extra glossy melodies that make the record more accessible to people outside of the scene 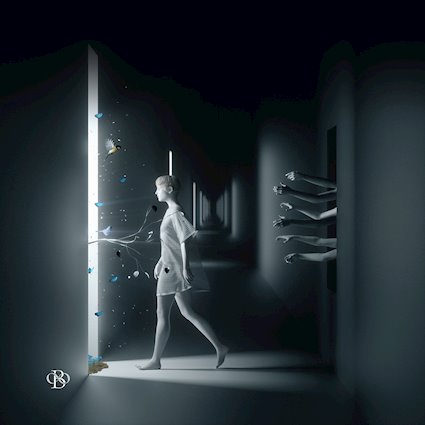 Opener ‘Here’s To You‘ has some underlying crunch and pound in those guitars, but an overlay of poppy melody and an emotive and mellow intro that makes the song a bit of a cyborg. It opens well, but is inferior to following track and single ‘Drink About It‘. Experimental and channelling some slight nu-metal vibes, it’s certainly an album highlight. It’s the strongest of the singles, with the hip hop influences of ‘Tapping Out’ not really sitting well and ‘Flexin‘, despite being a decent song, feeling a little like a rehash rather than a band expertly wielding the genres that influenced them.

It’s certainly true that the most successful tracks on the record are the deeper cuts. ‘Find Forever‘ is deeply infectious and irresistible, containing some of the most intricate guitarwork of the record, and the title track is a cinematic closer somewhat reminiscent of ‘Sudden Sky‘, which closed Crown The Empire‘s latest record of the same name. ‘Your Sake‘ is also a mellow, wonderful little track that has some beautiful and thought provoking lyrics. “Why the hell is it raining so much” is also, strangely, the most addictive hook on the record, from ‘Rain‘, showcasing Carter’s vocal strength perfectly.

Issues have juggled a hell of a lot of influences on top of their traditional sound, and it works about 75% of the time. What you have here is a melting pot of sounds and genres that shape the whole album, but when it doesn’t work it knocks it completely off kilter. ‘Downfall‘ is one of those songs, not quite sitting right, and ‘Get It Right‘ sounds like it wants to be a Fall Out Boy song but its parents wouldn’t allow it.

There’s also the fact that, with so much going on, it’s hard to structure the album as a cohesive piece. While this doesn’t exactly matter these days, what with Bring Me The Horizon putting out ‘amo‘ to near complete praise (for some reason way beyond my fathoming) it does still affect one’s enjoyment of an album from start to finish.

That being said, is this a good record? Yes. For sure.