Self-proclaimed hip hop/punk mutants Ho99o9 are set to release their debut album United States of Horror on the 5th May. This record manages to encapsulate the chaotic nature of Ho99o9 in a live environment whilst still remaining focused and artistically challenging throughout. Ho99o9 are one of these bands that are unclassifiable. Fronted by two of […] 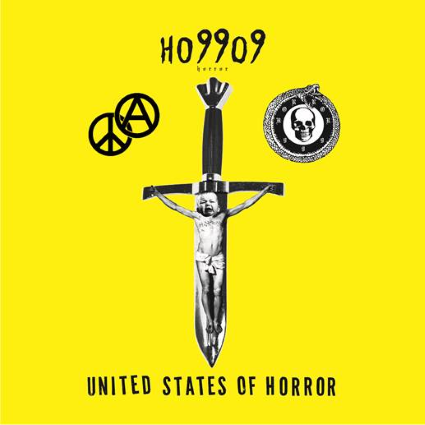 Self-proclaimed hip hop/punk mutants Ho99o9 are set to release their debut album United States of Horror on the 5th May. This record manages to encapsulate the chaotic nature of Ho99o9 in a live environment whilst still remaining focused and artistically challenging throughout.

Ho99o9 are one of these bands that are unclassifiable. Fronted by two of the most energetic frontmen in the industry, with a phenomenal drummer and a sample deck behind them, they produce a sound that is perhaps best described as a combination of Band Brains and Run the Jewels. Whilst this may sound impossible on their debut United States of Horror, this amalgamation of sounds works to aplomb.

The album as suggested by the title follows a militant like view against the current state of the United States and the world. This militant, revolutionary aspect of the album whilst obviously present in the lyrics, is further enhanced by the power of the backing tracks sampled on this record. Each sample has a highly distorted sound which produces a really underground style sound. In some areas the samples almost created an industrial sound (Bleed War for example). When used on both the hip hop and punk samples this distortion alone encourages uprising.

One of the unique aspects of Ho99o9 was their chaotic live show, and a question many asked of them is if they would be able to capture that energy and chaos on record.  Whilst the distorted samples and fast energetic drumming help create the picture of chaos, it is the vocal trade-off between Jean and Eaddy which encapsulates the bands chaotic energy. This is achieved when one of the front men will focus on the main lyrics of the song, as the other offers backing vocals which seem to follow no clear structure, yet work brilliantly in the overall context of the song (most noticeable on Face Tatt and Knuckle Up).

The majority of the songs on this album do follow this concept of a mutant sound that combines hip hop and punk. However some songs have a more distinguishable hip hop edge (Hydraulics and Splash) and others distinctly more punk (Street Power and Sub-Zero). Further to this the way the some of the sampling is used to create a dark and gloomy almost gothic atmosphere draws direct comparisons to Marilyn Manson.

This album is beautifully chaotic. Through all their noise and energy Ho99o9 have created a debut album packed full of songs that are made for the live environment. The subtlety of the hooks, the raw energy and the loud uncontrollable distortion of the samples encapsulates the chaotic nature of Ho99o9. All the while the record maintains its focus and complex artistry throughout.

While it’s hard to categorise this band, if you are fan of the darker, more chaotic side of Marilyn Manson, the more energetic aspect of hip hop or if you simply like music jam packed full of raw energy then this album will not disappoint.