Atlantic recording group Halestorm have unveiled details of their third EP of cover songs. Produced by Nick Raskulinecz “ReAniMate 3: The CoVeRs eP” will arrive in stores and at all digital retailers and streaming services on Friday, January 6th. Grammy award winning American rock band Halestorm are well known for their near non-stop touring often […] 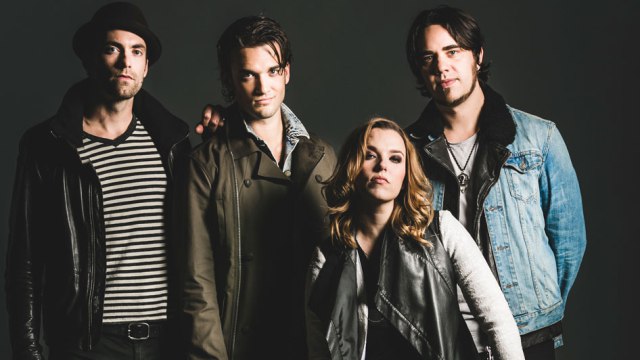 Atlantic recording group Halestorm have unveiled details of their third EP of cover songs. Produced by Nick Raskulinecz “ReAniMate 3: The CoVeRs eP” will arrive in stores and at all digital retailers and streaming services on Friday, January 6th.

Grammy award winning American rock band Halestorm are well known for their near non-stop touring often performing as many as 250 shows a year.

First track on the EP is a cover of “Still of the Night” originally performed by Whitesnake. Starting off with an extremely raspy vocal from lead vocalist Lzzy Hale. Guitars immediately kick in giving you that overwhelming feeling. With the style and form that the band plays this track it gives you an in-sight that this track would be a great song to be played live from this band. Definitely highly listenable!

Next up, is “Damn I wish I was Your Lover” by Sophie B. Hawkins, the lead guitar and drum beat is exceedingly striking! The flow of this track is very sweet, and Lzzy pulls off vocals flawlessly.

Now for Joan Jett and the Blackheart’s “I Hate Myself for Loving You”, the vocals resembling Joan Jett’s style of singing really fits in from this band. Quite predictable from a band like this but non the less, pulled off well!

“Heathens” by the now pop orientated band Twenty-One Pilots runs on next on the EP. The song in general has never been able to grow on me and listening to this cover from start to finish it still can’t seem to enlighten me. Other than the fact, I really can’t bare to listen to this track, it was well done and everything was on point and female scream vocals were insane.

Second last on the EP is SoundGarden’s “Fell on Black Days”, the track starts off very rock and roll sounding which a deep and soulful vocal with is very soothing with the way it has been performed. This style of music gives me goosebumps, I’m quite the fan of the cover!!

Last but not least is, “Ride the Lightening” originally performed by Metallica. The drum beat to this track starting off is full on and catchy, which guitar riff’s kicking in, I’m beginning to love this track already even without the vocals. WOW! The vocals kick in sounding a lot like Taylor Momsen from The Pretty Reckless. 10/10 on this track!

I’d definitely recommend this EP when it is released, it was definitely sung with passion and so much effort being put into this EP!