Death Blooms – You Are Filth

According to other people, Death Blooms are a big thing for the UK hardcore scene, so the release of their new EP ‘You Are Filth’ is an important point for the band. Having only 4 songs, however, means they have to deliver the goods. And they do, but theres a few bads in there too. 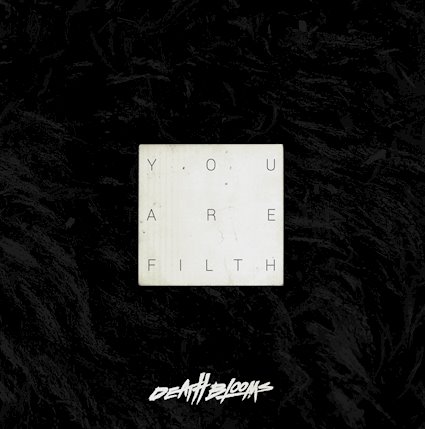 Opener ‘Crosses‘ has enough melody to please someone unfamiliar with the band and genre, with a chorus reminding me of the later output of ‘Burn Halo‘. The verses, however, are exclusive to fans of metalcore, though the screams are issued with a hint of post-hardcore angst. ‘Filth‘, the half title track, is a much more plodding, punk affair. Pounding drums lead the chorus, while the verse are again the heaviest part of the song. Its a formula, but a winning one for the band.

‘Believe‘ begins with the clean vocals, switching us up a bit. Its definitely the most accessible and appealing on the EP, at least to me (I’m a fan of 80s rock and pop punk though, so if you’re into heavier bands, I ain’t your guy). Hell, its almost catchy, but not without the aggression. ‘Rotting Away‘ ends us, and is my least favourite here. It’s heavy for the sake of it, and it doesn’t have to be. Or want to be. Remember those Grumpy Cat memes. The ones that said ‘no’. That’s me with this track.

It isn’t me with the EP as a whole, however. It’s catchy enough for an outsider and heavy enough for someone looking for a pit to almost get crushed to death in.

Damn I sound cynical. I’m not. I swear. These are good tunes, mostly.