A room half full for opening band Puppy, as a few heads bang in sync with the heavy tones provided getting a nice reception after each song. As they explain to the crowd about the “good bands coming up” it is noticeable that the bill is in perfect order as each band is announced, everyone […] 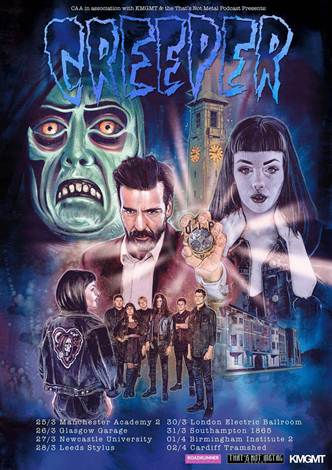 A room half full for opening band Puppy, as a few heads bang in sync with the heavy tones provided getting a nice reception after each song. As they explain to the crowd about the “good bands coming up” it is noticeable that the bill is in perfect order as each band is announced, everyone response grew louder. Mid set sees the first moshpit of the night as a vibes get heavier for Puppy.

With a band named Energy, you expect they will bring that to the show tonight. Starting off by announcing they have come a long way (Boston) requesting the crowd to circle pit, which of course, the energetic youth in the room do just as demanded as they blitz through their opening song. Guitar issues strike momentarily 3 songs in, as the vocalist keeps the crowd riled up introducing a new song written especially for this tour.

Main support Milk Teeth have the room full from back to front as they take to the stage getting great response as the front area sees the majority jumping around, singing the words back. The first crowd surfer of the night appears as there is evidently a huge portion of supporters towards the female fronted grunge/punk 4 piece. Slowing things down with a duet during a more deeper, darker song that also featured the first verse of Allstar (Originally by Smash Mouth) before bringing back the other band members for the fast paced punk spirit as the hyped up section towards the front are throwing their fists in the air and their bodies at each other.

As the stage is lit with gothic purple mirrored crosses, Creeper open with Black Rain, as the cults arms are raised and screaming back every word sung by frontman Will Gould. Announcing that they have sold out every London show they’ve played, The Old Blue Last twice, Barfly, Underworld and now Electric Ballroom, it’s no wonder they were the Kerrang! Award winners for Best British Newcomer and Metal Hammer Best New band in 2016. Within the year of these winnings, 2017 has proven to be their year with the debut full length just released last week. The cult are clearly having the time of their lives breaking more than a sweat of such intense atmosphere full of energy. The band themselves giving all they have, which accompanies the great stage presence and performance, truly making every ticket holder know they got a bargain. Creeper chants begin to fill the room as lights go down while the band regroup to prepare for a beautifully sung acoustic track by Hannah (keyboards) taking the spotlight as she gets chanted on by the adoring fans, before reverting back to the Creeper chants as we dive head first into another punky upbeat track with remarkable resemblance to early AFI. Hiding With Boys leaves the crowd singing “loving you is killing me” at the top of their lungs while the band look amazed at the response given towards them. Speech time, as Will offers water to the barrier huggers as a sign of peace offering, before demanding waves of crowd surfers which seen a tsunami of bodies being dragged over the rails, putting the security team to good use. They follow this up by showing fan appreciation for everyone who has believed in them as a band, and helped them to where they are today, as the crowd applaud and chanting “Creeper” repeatedly before announcing the final song of the set, as the duet of vocals and keyboards play out in I Choose To Live. After briefly leaving the stage, fans want more (why wouldn’t they, tonight has been a blast!) as Creeper play 2 more tracks ending on their latest release Misery which leaves 90% of the song being sung by the crowd alone, which for Creeper must feel amazing to hear their music being sung back as loud as this.

Finally reaching an end, the Creeper members hold hands and take a bow to this yet again sold out London show. Set for bigger things in the future, with their long awaited debut album, the sky is the limit for Creeper and can only hope the next time they perform, it will be on a grander stage, to sell out once again.