In their first 5 years as a band, Creeper crafted the perfect path, releasing an EP each year for three years, touring relentlessly and then putting out their debut album Eternity In Your Arms. It felt like they were never far away from our speakers and stages and that enabled them to grow hugely in that time. Oh yeah, and the outstanding goth-punk-opera rock songs helped a bit too. Then on 1st November 2018 they played their final show of the tour and announced the end. Then there followed a year of radio silence. Anyone familiar with David Bowie would recognize this as the shedding of a skin, the entry to the cocoon, and, exactly one year after that fateful show, they reappeared with a single and shortly followed it up with the announcement of Sex, Death & The Infinite Void. Now, following a lengthy delay due to COVID-19, the release of one of the most hotly anticipated albums in recent years in upon us. 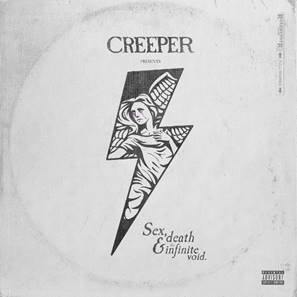 The first thing to say here is that the skin that has been shed is the punk and hardcore one. There is nothing of the style of Poison Pens or the opening half of Room 309. The fastest and punkiest sections of this album have already been released in the form of Born Cold, Be My End and Annabelle, the latter of which displays Creeper’s unbelievable ability to pen a bridge that perfectly reduces the song to a simmer before crashing back in with the chorus at just the right time.

Usually, a record opened up by four singles would signal a drop in quality, but that is not the case. As mentioned, the faster edges from Eternity In Your Arms have been trimmed. They’re eschewed to enable them to put the word goth in front of umpteen other genres. Whether it’s the Arctic Monkeys in make-up of Paradise, the Johnny Cash with dyed-black hair of Poisoned Heart or the Meat Loaf crossed with My Chemical Romance bombast that is Thorns Of Love, Creeper have traded speed for even more grandeur and greater song-writing scope.

The above mentioned tracks form a run of three in the centre of the album that perfectly encapsulates what is so wonderful about this album. They take such a myriad of ideas and themes, but it never sounds like anyone except Creeper. The choruses across this record are truly exceptional, and never more so than on Poisoned Heart which has a simplistic guitar strumming pattern with piano accompaniment providing a base on which Will Gould weaves a truly breath-taking vocal melody.

From there keyboard maestro Hannah Greenwood takes centre stage with lead vocals on Four Years Ago, a slow-burning, beautiful song that seems to borrow from the slow sections of November Rain while combined with a smoky bar room croon of a vocal. The microphone is then handed back to Will, who seems to have donned his leather gloves and slicked his hair back for the Depeche Mode-sounding Napalm Girls.

The album dips ever so slightly at the end, with Black Moon sounding like a perfectly serviceable, yet also lesser, version of things already accomplished on the album and All My Friends attempts to provide an epic closer but between a slightly generic melody and some ham fisted lyricism (“Getting high has got us all so low” sounds like it was jotted in the back of a maths book) doesn’t quite hit its mark. In all honestly though, on any other album these moments probably wouldn’t stand out, it is only because they come at the end of an album which hits the bullseye with every song that they do here. The only other black mark against this album is the over-wrought spoken word sections. It is certain that they are signifiers of some wider storyline or concept through this album, but at best they feel unnecessary and at worst they detract from the songs such as the “Clipping Cupid’s wings” section in Thorns Of Love.

When viewed as whole, however, this album is a triumph. It may not have the same level of youthful energy as Eternity in Your Arms, but there is a greater scope to the song-writing than was present there and this feels like a much more cohesive piece of art.