‘Bad Solution – The War Within’

Bad Solution‘s The War Within brings you squealing guitars, thunderous riffs and a mix of aggressive yet melodic vocals, in a classic yet exciting metal fashion. A true blend of rock and metal. Musically genius. The vocals do lack slightly for me in places and could compliment the music/emotion/themes more, but just when I start […] 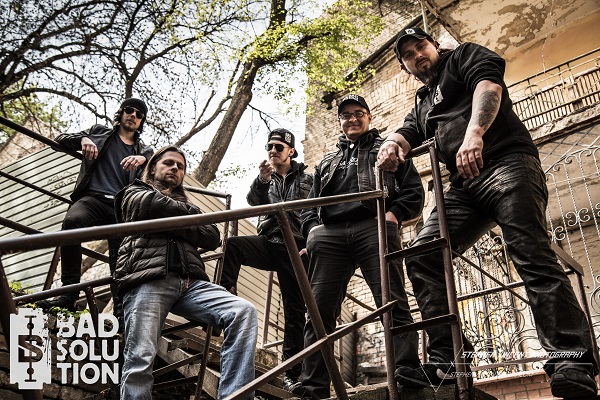 Bad Solution‘s The War Within brings you squealing guitars, thunderous riffs and a mix of aggressive yet melodic vocals, in a classic yet exciting metal fashion. A true blend of rock and metal. Musically genius. The vocals do lack slightly for me in places and could compliment the music/emotion/themes more, but just when I start thinking that, he throws out some corkers of lines and melody. It’s on the heavy side of hard rocks love child with metal, and we love it.
First track of the album (and single) ‘Drowning’ drops you straight into it with strong riffs and in your face drums setting the tone for the album, however the vocals aren’t quite as expressive as I’d expect for meanings that run so deep, vocalist Adam states that this song ‘deals with the struggles of drink and mental health .. suicidal thoughts and tendencies’. The lyrics are powerful but the delivery is lacking in the chorus. Nevertheless, those riffs and rhythms had me at hello.

‘Nothing (You Don’t Know Me)’ starts with an epic finger twisting, ear spunking, squealing goosebump inducing lead riff. It reminds me a bit of Three Days Grace in the chorus, much stronger delivery and you can’t help but bang your head along.

The first three songs of the album seem to end abruptly and could have benefited from being a bit more thought out, everything else is well polished so it seems odd that they have no real end.

‘Self Destruct’ takes a different approach, featuring a piano melody intro showing the versatility of the band and is a nice respite for the album. Tracks like this you have to be really careful with, they either soar like a phoenix or flop like a soggy turd. This track definitely soars. From the vocal line coming in to the emotive tone-a-licious lead guitar it continues to develop stronger and stronger as the song goes on.

Next up is ‘Echoes of the Cry’, a very mysterious and entrancing start, leading into an almost folk tinted vocal line. From start to finish, what an incredibly strong, moving song.

The pace is brought right back up with next in line ‘The Last Lie’, starting off with demon-esq riffage combined with those beautiful pinch harmonics I can’t get enough of. It also has a truly beautiful ending, more of that folky twang flickering into play coated heavily in metal, this brings a whole extra flavour to the table.

Continuing the flavour bringing elements, ‘Desert Rock’ churns out an eastern feeling riff backed with heavy tribal drums and distorted chugs. This album really gets better and more intriguing the deeper you get into it. The chuggy perfection of ‘Dear Sarah’, the wah wah of FOD’ and the winding intricate delicious melody of the guitars in ‘White Washed’ really leaves you wanting more.

For fans of Metallica, Disturbed, Five Finger Death Punch & Shinedown, this whole album is packed full of epic riffs you want blasting out the speakers on a Sunday afternoon to drown out the neighbours ‘Top 40 UK’. You want it as your pushing the speed limit on your motorbike on a sunny day. You want it in the shower. Getting ready for a night out. Anything. Those guitars and drums though.