Since the release of their highly-praised 2015 debut album Never Happy, Ever After, Brighton, UK’s As It Is have garnered an ever-growing, devout fan following with their sincere and relatable lyrics, charged with energised pop-rock melodies. With the release of their sophomore album Okay., the members of the transatlantic quintet – Patty Walters (vocals), Benjamin […] 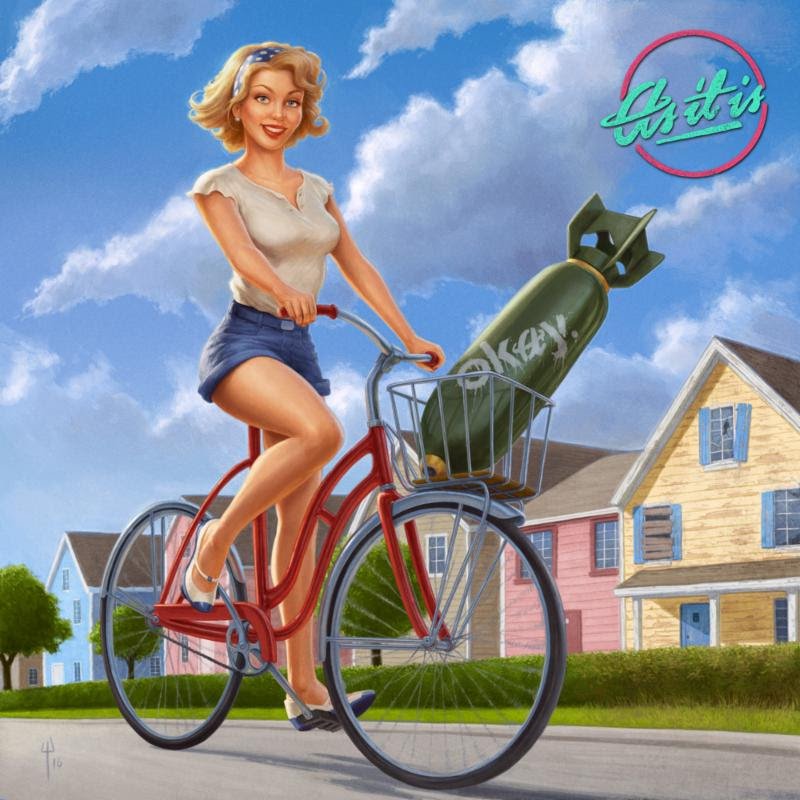 Since the release of their highly-praised 2015 debut album Never Happy, Ever After, Brighton, UK’s As It Is have garnered an ever-growing, devout fan following with their sincere and relatable lyrics, charged with energised pop-rock melodies.

With the release of their sophomore album Okay., the members of the transatlantic quintet – Patty Walters (vocals), Benjamin Biss (vocals, guitar), Andy Westhead (guitar), Patrick Foley (drums), Alistair Testo (bass) – push themselves both musically and lyrically to craft their most personal and honest record to date. To record okay., As It Is trod new territory with producer Mike Green by molding a record that leaves the band unabashedly honest and entirely transparent, expanding their sonic depth while still holding on to the classic As It Is undertones that fans have grown to love and hold on to.

The first track of the album is one of my favourites from As It Is, “Pretty Little Distance”. Being the first track of “okay” means it gives you the first insight to their new sound, their sound hasn’t changed drastically but you can tell they have changed which is a positive thing because it seems they have found their style and sound which is always a good thing for a band! The track starts off with a nice, happy guitar riff followed by those iconic vocals from Patty. The lyrics are awesome and fit the whole criteria of the song, along with the drum beat to this, this song is very uplifting and puts you into a very happy mood. The video along with the track is perfect, the whole vibe suits the song so well!

Second track is “okay” starts with a great guitar riff followed by those classic Patty vocals. This song is very catchy, it’s one of those songs you can pick up instantly and will be singing along by the second chrous.

Third track on “okay”, is “Hey Rachel”.. I love the lyrics to this track! “Hey Rachel I’m sorry, I was younger and scared when you needed me” lyrics that I guess, a lot of teens and people in their early 20’s could possibly relate too. The drum beat is catchy and clear when the song goes quiet and slow mid way through the song.

“Patchwork Love” is the next track, the song names to this album are great! A definite 60’s vibe! Automatically my favourite song when those guitars start, this is a track that gives me goose bumps and is the literal music to my ears. The bass is so clear in this also, great production!

Next up is “Curtains Close”, this seems to be a common slow track which to be fair is a necessity to every album. Listening to this lyrics carefully to this song, it’s pretty deep with what vocalist Patty is talking about. Benjamin and Patty’s harmonies fit so well with this track, it’s so peaceful.

“No Way Out” is the sixth track for As It Is, the echo effect on this track is interesting, you don’t always get this from bands. Benjamin’s harsh vocals have improved a lot and it’s always nice to hear the backing vocalist get a lot more parts, especially on this album. I am LOVING the part in this song where Ben and Patty are talking but still singing, it definitely grabs your attention!

Seventh on this album is “Soap”, been hearing this a lot lately, I like the new style of vocals. Heated vocals are always great to hear from this band. Lead guitar as catchy and clear. The rhythm is so nice, really loving this track too.

“Austen” is next, a dark and mysterious start! This sounds like a song that would be great live. This album has intrigued me the whole way through, 100% enjoying it. Great guitar play also.

“Until I Return”, this song title sounds like a caption from the war in the 60’s. Such great high notes from Patty followed by Benjamin which gives the vocals the full package! Classic pop punk fast paced drums and guitars.

Second last song is “The Coast Is Where Home Is”, nice echo effect at the start, I really am loving the fact Benjamin is more clear in this track, as much as I love hearing Patty, it’s always good. Shows the connection and bond with this band.

Last but not least is “Still Remembering”, very gentle and subtle acoustics, I sense a Sleeping with Sirens vibe from this, I have definitely not been let down from this album and band. Lived up to their word and came out with a perfect, well produced album. 10/10 for effort!

This album has been a pleasant listen, a lot of good tracks within this album and a few favourites. I’d rate this album a strong 8/10!