All That Remains – Victim of the New Disease

This is never going to be seen as just another album, it’s the final recorded output of an excellent musician, and a master of his instrument. RIP Oli Herbert. 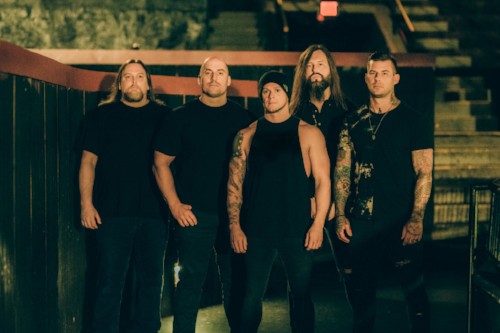 An album release is usually something to be celebrated. It is a chance for fans to hear the fruits of a band’s labours and to enjoy the latest release from their heroes. In the case of Victim of the New Disease, however, a long shadow is cast by the sudden and unexpected death of guitarist Oli Herbert in October of this year.The other members of All That Remains have recently confirmed that they will continue as a band and that it is what Herbert would have wanted. But with this tragic event looming over it, it’s hard to evaluate this album objectively, especially while the exact circumstances of his death are still unknown.

The albums flies out of the speakers with the battering drums of Fuck Love, a Slipknot infused rager that slams you up against a wall before Everything Wrong brings things to a more melodic place with a skyscraper of a chorus that Ivan Moody would kill to write. There is nothing subtle about the production of this record, with the aim seeming to be to make drums and bass sound as big and inorganic as possible. Whilst mentioning the production, it should also be mentioned that auto-tune is something that very rarely works in metal music, and its brief and jarring appearance in I Meant What I Said is no exception.

It’s a shame to have to mention that dodgy experiment, because across the rest of the record, the vocal ability on display from Phil Labonte is exemplary, from the death metal screeching of Blood I Spill to the enormous arena filling choruses of Wasteland and Misery in Me.  Wasteland also features an exceptional wah-wah drenched solo from Oli that will stand as a testament to his ability and keep him in our memories for a long time to come.

The slower sections on this album are where it seems to struggle a little, with songs like Alone in The Darkness not handled with quite the same dexterity as they manage on the faster harder-hitting material.

As an album, it’s another good release from All That Remains, with enough good material to top up the live set. But this is never going to be seen as just another album, it’s the final recorded output of an excellent musician, and a master of his instrument. RIP Oli Herbert.