Interview With The Kut At Camden Rocks Festival

Mark Wincott & Robert Brennan caught up with the brilliant The Kut, a three-piece 90s grunge inspired outfit. Fresh off the back of performing, the trio joined Mark and Robert in a park somewhere in North West London for a chat… 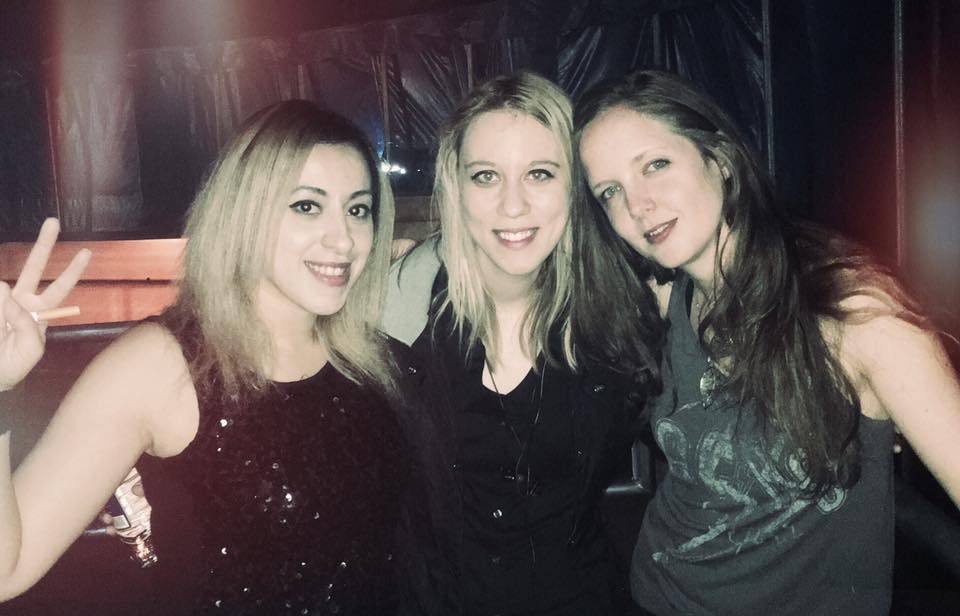 Mark Wincott & Robert Brennan caught up with the brilliant The Kut, a three-piece 90s grunge inspired outfit. Fresh off the back of performing, the trio joined Mark and Robert in a park somewhere in North West London for a chat…

How was your gig at Camden Rocks Festival?

For midday it was quite busy to kick it off, but I couldn’t hear the guitar.

It was great for me, because we are in this line up and I’m enjoying playing we are getting tighter and tighter with all our performances.

I hear a lot of L7 in your music, are they someone you are influenced by?

Oh really? Yeah I like L7 quite a lot actually, they are great band. We do get a lot of comparisons to a lot of female acts which is ok, because…we are female.

How did the gig come about at Camden Rocks Fest?

Well, we played at the Nightmare Festival for the same team before and that was pretty cool, we played at Proud. So they had us in for another show at Barfly and then they messaged us to play this and we were like, Oooooh yeah! Oh hell yeah!  I was a bit worried about the time slot, but it turned out to be good and it doesn’t matter about the time as we got to play this festival, which is awesome.

How do you normally go about getting a gig, for the unlearned that have no idea about this stuff?

To be honest, at the moment we tried our best not to do gigs and we keep getting asked to do shows, we try not to do them as we planned to do our tour in August. That August tour is still going ahead. We have 30 dates around the UK – we start in London, then off to Wales, up to Blackpool festival then in Scotland, North East and we are doing a lot of shows in a lot of places. We planned that, August is going to be our tour so we won’t take any other shows. But we keep getting offered slots and how can you turn down the Camden Rock Festival…..You just can’t.

Our mate Chris at Criminal Records helps out, he’s sort of like our agent but isn’t, as we don’t have one at the moment or a manager. We are definitely looking for a manager though.

You have an EP released; will you be working on an Album at all?

We’re just getting it together now, we have our Bad Man single out in July, so a video for that, then the tour and then another release and then the album…I think.  We will see if it works

I Don’t Need Therapy is a great song, tell us more about this…

I really loved that one coming together, it’s the idea that it’s your birthday and everyone is being a shit bag to you and telling you what you should be doing next trying to bombard you with their version of advice and your meant to sit there smiling and say “yeah I’ll do that”..But you just want to say you know what, I don’t need or want your advice. The idea is set on your birthday and you get that birthday cake and everything is glossed over and all you want to do is get a slice and throw it at people.

Who do you want to see at Camden Rocks Festival?

Hands Off Gretal a really cool band, we played with them before up in Scunthorpe and it is a really good line up, we just met them at the gig and one of their people contacted us to play together and we got on the same bill as them, it was Hands Off Gretal, us and Healthy Junkies. Healthy Junkies are so good, definitely worth checking them out.

I love your drumming style, can you tell us more about this?

Diana Bartmann: Thank you – it’s like a mixture as self taught drummer and then at some point I started to think I was ok, I hit a wall I knew that I could get better and needed to do something and improve, so I get some more lessons, I applied for a course in London to study drum performance degree course. They accepted me

My style is very expressive drumming, like a visual drummer which I always liked, someone such as Keith Moon who was really great he combined hard rock drumming with expressiveness with big motions and just great stuff – had played with gold fish and that isn’t something you cannot do today.

I feel like I can really express myself on stage and you can do that in normal life. I can how I feel deep inside while on the stage and it is great release form real life at times.

The band also suits my drumming my style as the band is all about that.

Have you had any spinal tap moments?

(They did answer this question, but I think I have a new answer…see below)

From this moment we talked about acceptance of how people look

A lot of the angsyt and negative stuff does comes from my experience with not great acceptance of sub cultures in Blackpool. I have a bee in my bonnet about these issues. The music scene is quite divided and there’s a lot more coming up now such as Rebellion festival and other bands coming up. They are kind of fighting it, but you still have that very negative stance on the way that you look. That is why we got involved with the Sophie Lancaster foundation.

It’s a heart-breaking story to read about, the girl and her partner had been attacked just for the way they looked. Bullying is the word that I can only think of, it‘s by people who don’t really understand the rock sub culture, it is underlining many issues.

Back to the Spinal Tap moment

I met with Diana and Princess Maha at the Crowndale after their gig. After their 12 o’clock set, they were preparing to take their equipment back to their car and drive off to meet up with other bands. The guy at Crowndale, said don’t worry you can leave it here, go get your car so you don’t have to carry all that.

I said we can do the interview at your car if that is easier for you – so off we went…..45 minutes later The Kut located their car. So people, not only drunk people forget where they park, Rock Stars do too.

We did the interview in a park somewhere in the back streets of North West London. It certainly was a Spinal Tap moment, as the words spoken are – I think it’s the second right we parked – they asked five road workers if there is a road near here with plastic barriers.

The two members I spent the hour with are definitely in this game for the long run, their presence and talent is a sight to hear and see. They are The Kut and they are not looking for love or groupies due to not being get them in the car with all their equipment or sometimes they may not find their car.

But It was a pleasure to meet the Kut and I look forward to watching their journey.