I had a chance to sit down with Roger of Less Than Jake on the eve of Halloween (which was also his Birthday!) Here is how our interview went: First and foremost, I’d like to say how stoked I was to find out I was interviewing Less Than Jake because you were the first band […] 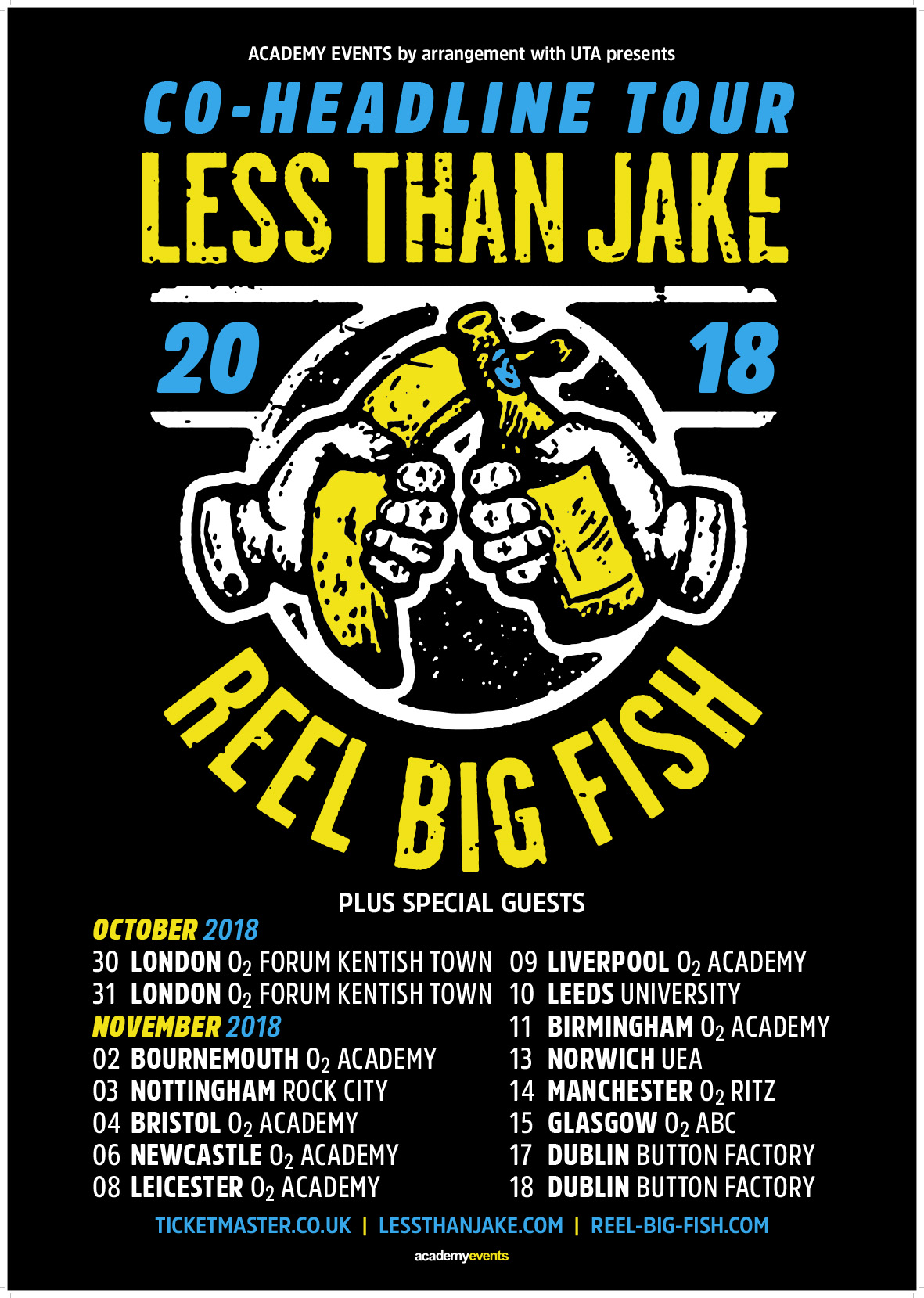 I had a chance to sit down with Roger of Less Than Jake on the eve of Halloween (which was also his Birthday!) Here is how our interview went:

First and foremost, I’d like to say how stoked I was to find out I was interviewing Less Than Jake because you were the first band I’d seen live in 2004 in Plymouth Pavilions and you personally influenced me to start playing bass

“Oh really, that big triangle place? I was there!… It’s kind of, you don’t really think about this things as time goes by, you just go up and play the show then a few years go by and realise you have changed people. It’s weird to be in that position.”

“So this stellar tour line-up kicked off yesterday right here in London which I’d personally dub best tour of the decade, how was night #1 for you?”

“It was awesome man, we did a couple of warm up shows in Europe with Anti Flag, some smallish festivals, and that was cool… And then you always know when you’re back in the UK because people are always fucking completely crazy and yeah, it was a great show. We’re looking forward to tonight mixing it up with songs so it’s good.”

“After an incredible 26 year career LTJ are still at the top of their game selling out big shows, how can you define your career so far?”

“LTJ hold the record for most Warped Tour appearances, how does it feel to know it is over and what would be your plans during the Warped Tour season?”

“This is truth! It’s kind of crazy we did do a lot of them, but we kind of did them every other year basically, if not the whole thing then 3 weeks or so, and it did kind of catch up and then towards the end I was like “Oh, we’re going to win this thing, and go down in history with the most Warped Tour appearances” haha. I think it’s cool, there won’t be anything to replace it in the States, something that travelled the way it did, it was too chaotic and a miracle it worked because sooo many people had to do that job to pack up and move 12 hours away and pack up the next day, it was insane. You guys are kind of spoilt over here, you have a lot of festivals. We’ve been playing some new pop up festivals like one called 350 Fest in Chicago with Descendants, Mest, A Wilhelm Scream. There will be new opportunities out there but nothing will replace Warped Tour.”

“How’s the transaction been between Vinnie stepping down from the drums to Matt taking over as sticksman?”

R: “Oh Shit… He’s been great on the touring side of things, it’s been a long time and we are ready to shake things up a bit, awaken the beast and Matt’s very flexible of playing different songs and songs we haven’t played in a while and that’s kind of refreshing to play songs that have been left on the back burner for a while, but I think it’s going to be a very amicable thing in the long run. Vinnie’s still going to be involved with a lot of the band promotion and behind the scenes stuff as he’s always done which was a main focus of your band, you know? Yes he was the drummer for the band and we wrote a bunch of songs together but really his passion was making the artwork and all these important details.”

“What song’s never fail to be part of your set and why?”

“Being veterans in the business, what would be your #1 tip to up and coming bands?”

“Did you just say I’m fucking old?… Just kidding, So they have this thing calls Craigslist, and you can totally just take a picture of your equipment and put it up for sale. Just do that. It’s too much work, you’re not going to make it. No, I don’t know. I record a lot of bands, I have a studio and I try to help bands here and there and the one thing I found is that a lot of bands get caught up on not being ready to put their stuff out there. They have some music, they are working on songs, and like “Oh, well we’re going to try and go to the studio” and then be like “Oh, we didn’t do it exactly how we wanted, we want to redo some stuff,  maybe we can put it out next year” and there’s just this weird delay that happens with younger bands that don’t just get their songs out there for people to listen to them. I think that’s a general mistake, you should do what you’re going to do, record it and put it out there, play some shows, right some more songs, record them, play a couple more shows. Get the music out there for people to listen to. Maybe people out there are like “I like this band logo” and buy the t-shirt because of some cool logo, but really people are going to like you because of the songs, so might as well get those songs out there and figure out who your fans are. Do that, stop sitting around.”

“If you chose a band/artist to cover a Less Than Jake song, who would it be and which song?”

“…. Something outside of the box would be pretty cool… Uhmmm… I could see… I would like to hear, something soulful, older, like a Macy Gray version of one of the faster songs, like… *Sings Soulfully* “And what’s in my head is that I don’t really give a damn, just who you think I am…” So ‘Last One Out Of Liberty City’ by Macy Gray, hows that? All slow and jazzed down and shit right? I’d get high to that!”

“Last question, I asked an online community to provide a question, Pineapple on Pizza, yes or no?”

“Oh fuck no. That’s messed up man. Well, number 1 I’m allergic to pineapple so for me personally it’s not even an option and number 2, that shits fucked up. Meat belongs on pizza, no? So yeah I’m not a pineapple on pizza guy, sorry to bum you out internet.”