Interview with Jocke of Hardcore Superstar

Hardcore Superstar frontman Jocke was kind enough to sit down for an interview prior their set at O2 Islington Academy in London. Your new single ‘Have Mercy On Me’ was released in October, when are we expecting the new album? “Yeah, it’s coming out in March and we’re releasing a new single 13th December called […] 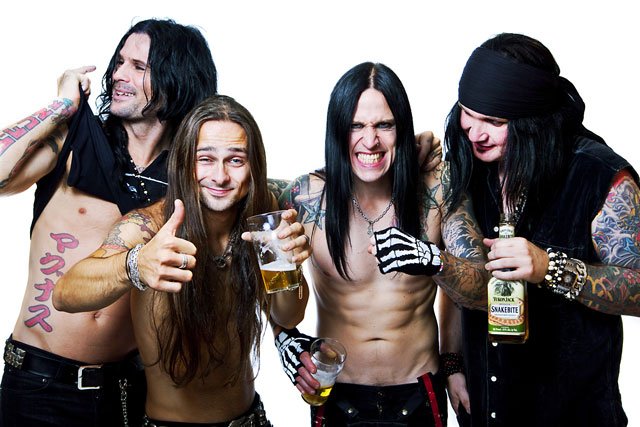 Hardcore Superstar frontman Jocke was kind enough to sit down for an interview prior their set at O2 Islington Academy in London.

Your new single ‘Have Mercy On Me’ was released in October, when are we expecting the new album?

“Yeah, it’s coming out in March and we’re releasing a new single 13th December called Baboon and we made a video for that so yeah, there is a lot of things happening now.”

Are we expecting to hear any of the new tracks on this tour?

“No, we talked about it but if its not out, why play it? Or else the audience will be like “… What’s this?” You know?”

Will your new album provide any special guests or is it 100% Hardcore Superstar?

“No, it’s a straight up Hardcore Superstar record.”

Is there a particular song from the new album you can’t wait for the fans to hear?

“Yeah, the next single actually Baboon, it’s hard and catchy at the same time so I’m really looking forward to see what the audience think about it because I love it but you know, sometimes even if I love it doesn’t mean they will love it because the style of the song is very driven. It’s hard to call it a Hardcore Superstar song, but at the same time it’s a typical Hardcore Superstar song with all the catchy melodies and stuff.”

Let’s talk about the 20 year career of Hardcore Superstar, how have things been evolving in the band, has it been an easy or hard road?

“I mean we’re getting older, we don’t argue about stuff that doesn’t matter or anything. When you were younger you can argue about stuff that nowadays we look back and think I stupid, so I think it’s much easy today to play in Hardcore Superstar because even if we take it very serious, we don’t take it TOO serious. So that’s the best thing with Hardcore Superstar it’s become easier to be in the band. The hardest time in the band was the early days, when the record companies wanted us to sound like The Hives, I love The Hives but we are not The Hives, we were searching for our sound and took us like 7 years to figure out what we want to sound like, I think it happens to a lot of bands, they search for their sound and can’t find it then they break up whereas we still fought for it. So around the self titled album where we nailed it.”

What has been the most memorable time you’ve had being in Hardcore Superstar?

“I guess just the fact we have been able to keep doing this for 20 years, that’s the biggest thing to me I think. Usually bands like ours would be around for like 5 years, and we’ve been here for 20 years now, I think you can put that on your achievement list.”

We are currently at show #6 of the European tour with Fozzy, how has it been so far?

“Yeah, I’ve been ill throughout the first 5 shows but I’m a lot better now, we’ve never met Fozzy before and they have been so nice and we’re having a great time together. Fozzy are headlining the UK leg of the tour, and us ending the Europe dates.”

Okay, I like to end on some fun questions, given that you are on tour with the self proclaimed G.O.A.T Chris Jericho are you a WWE fan?

“I remember watching Hulk Hogan back in the days, but not nowadays.”

So if you was to debut a wrestling career, what would your in-ring name be?

If you was to choose any band to cover a Hardcore Superstar song who would it be?

“Death Angel. I think Dreamin’ In A Casket would suit, they would do it perfectly. I’m a big fan of the band and the guitar player is a fan of Hardcore Superstar. My dream tour would be with them, they are playing in Hamburg for a festival next week and I’m going to miss them. I miss them every time… EVERY TIME.”

Final question, for someone who doesn’t know Hardcore Superstar, how would you pitch yourselves to them?

Check out Hardcore Superstar‘s latest single Have Mercy On Me below: