South Walean melodic post-hardcore band Holding Absence have been making waves in the scene across the last few months. They’ve recently announced a tonne of live shows, including headlines and supporting We Are The Ocean on their final ever tour and they have just signed to Sharptone Records! We asked frontman Lucas Woodland to take […] 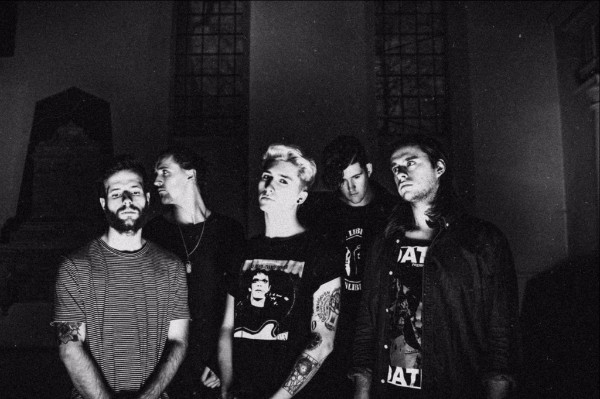 South Walean melodic post-hardcore band Holding Absence have been making waves in the scene across the last few months. They’ve recently announced a tonne of live shows, including headlines and supporting We Are The Ocean on their final ever tour and they have just signed to Sharptone Records! We asked frontman Lucas Woodland to take on our A-Z challenge;

Ooh, this is a hard one! I think I speak for all of us when I say “American Idiot” by Green Day is the first Alternative, angsty-punk tune that made us want to get onstage and do this when we were all about 11 years old. That’s still a raging album to this day.

We’re typically easily pleased – 3/5’s of us are vegan and the rest are vegetarian, so some hummus, peanut butter and fruit and we’re sold! It’s between a place called The Rigger in Newcastle-Under-Lyme that cooked us some awesome veggie burgers, or our good friend Dean Whittaker of Imperial Music who sorted us right out with a big supply of veggie curry when we played Bridgend recently. We were still up there munching scoff way after the venue’d shut. Not very rock n roll, but you can’t beat a good curry.

We’ve had a real crazy ride the past few months so the list is endless… On a band level, most weeks we’ve gotten some awesome news, between shows, label, management and so on. But on a real life level, we had some bloke called Yanto throwing locks at our van on the motorway one time on the way to a show in Birmingham. THAT was crazy. Worst guy.

Our song “Dream Of Me” was written entirely about the loss of love – A few good friends of mine mentioned how the song helped them, as they related it to the passing of a loved one and I had never planned to the write the song in that context… So in response to that, I’ll have to leave this open – If people could teach me things about my own music that I didn’t even hear, any lyric could be the deepest. And I do write pretty deep lyrics!

Nothing comes easy in this band… We really do slave away over the little things. I would probably say Permanent was the quickest though – Mainly just a case of me and Feisal tennising the idea back and forth until it was ready to be recorded.

That’s a very hard one. Our set is based around dynamic as much as it is based around the songs at our disposal, so everything’s there for a reason… Having said that, last track Penance is a 6 minute whirlwind of visceral emotion before bubbling into a massive outro. We really enjoy playing that one live.

Ooh that’s impossible! I feel like we all listen to a huge range of music and between our idols, whether it’s Simon Neil or Matt Healy, none of them would really suit! Having said that though, I don’t really “Scream” on record, so it could be good to have somebody with a decent scream to do something on a song maybe Keith Buckley, Jesse Barnett or Brendan Murphy‘d be cool!

Probably finance. We all struggle very much to keep jobs and pay rent between tours but it’s a sacrifice you’ve got to make, and we all know that.

Our drummer Ashley Greens birth surname is “Eggden”, and our guitarist Giorgio has webbed feet.

Writing is a tough one, there’s no real “answer”… But we do like to make sure every track is written with passion and feel.

We’ve only been playing shows for less than 9 months, and most are linked together… We had a really long drive back from hull once mind. That was a dangerous one haha

We have such an eclectic taste in music, our favourite bands range from Radiohead, the 1975 to Gorilla Biscuitz so there’s no real overall “inspiring” group to us but I feel like Architects, this past year, in light of all that’s gone on, have been a very inspiring group of musicians. Working so hard to honour the late Tom Searle and tour the whole world must’ve been so hard. That group are nothing short of inspiring.

Thrice, Underøath, Alexisonfire and Bring Me The Horizon. We’d love to tour with those wonderful bands.

America would be the dream for us. Hopefully sometime in the not so distant future.

I pondered this answer for a long time, but a few years ago I resonated with the Ghost Inside lyric “Do What Makes You Happy”, and I think that is a very relatable thing, and something we often forget to do.

Both Permanent and Dream Of Me are named after lines in the song!

You’ve opened a can of worms here. We’re playing 23 shows in the U.K. in just over a month. Head to holdingabsence.com for all the dates, there’s lots!

You’re always going to look at the past with rose-tinted spectacles, BUT, the two scenes from yesteryear that really inspire us most are the late 80’s UK Shoegaze scene (My Bloody Valentine, Cocteau Twins, Jesus & Mary Chain) and mid 00’s Emo/Post-Hardcore scene in America (Underøath, Alexisonfire, Thrice).

I would love to record some Acoustic versions of tunes someday.

The absolute world. If you are taking the time to read this, You are Everything. It’s cliché, but so important to us.

Xrays or any other treatments needed for any band related injuries?

Nah, we’re pretty easy boys. I mean, Ash cried after a show the other day but only because he was feeling emosh. No bone crunches here!

Well we did a run the other week in two cars, and the other car (Giorgio, James & Feisal) was late every show and I didn’t find out until after tour that they’d gone for a Toby carvery on the journey every time haha.