From Inside take on the A-Z challenge

Ahead of the release of their new EP When I’m Breathing Without You on September 14th, we wanted to learn more about Liverpool metallers From Inside, frontman Simon Mora obliged to tell us more by taking on our A-Z challenge! A song that made you want to make music? ‘From First To Last – Note To Self’ […] 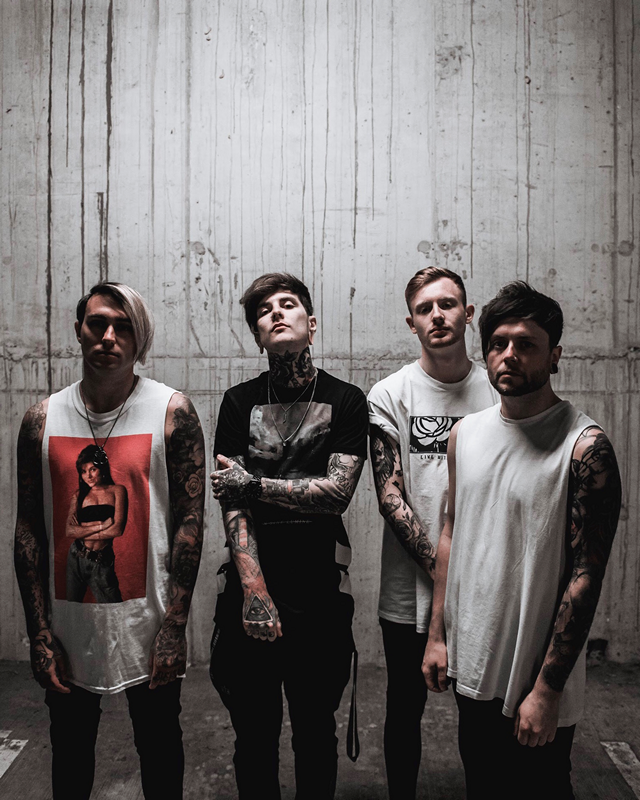 Ahead of the release of their new EP When I’m Breathing Without You on September 14th, we wanted to learn more about Liverpool metallers From Inside, frontman Simon Mora obliged to tell us more by taking on our A-Z challenge!

‘From First To Last – Note To Self’ was the song that changed my life. The first time I heard it I was like “holy shit, this is my life now” so I grew a big ass emo fringe, asked my mum to buy me some skinny jeans and assumed the role of aspiring emo front man.

It actually wasn’t ours, we played a hometown Halloween show with our buddies in WSTR and I spent the entire night raiding their Haribo.

We played a show in Wigan once, we loaded up the van after the show and couldn’t drive away because a random dude decided to take his dick n balls out and start rubbing them on the windscreen. I voted to run him over but the guys felt differently.

We have a new song in the works which I’ve wanted to write for a while, my lung collapsed playing Fury Fest Liverpool back in 2013 and the song is about my experience in hospital and how it really fucked with me mentally.

The title track from our new EP ‘When I’m Breathing Without You’ flowed easily for me because of how much I love the instrumental, so I really wanted to get it finished ASAP just so I could listen to it.

We have a track coming out soon called ‘Helpless’ and the breakdown is so fun to play live, for the most part our sets pretty chill so when there’s a big filthy heavy section I just go nuts.

I really want to get my dude Jayden Panesso of Sylar on a track, his energy is phenomenal.

The time, time is the worst part of being in a band, you have to be patient with every little thing which is hard when you just wanna release your new songs the second you finish them, but you have to wait for labels, managers, PR etc to give you a release date and by the time your new record drops, the bands already wrote new music and is excited to get that out instead. It’s a never ending cycle but if you love what you do, you can power through it.

I accidentally bought the coffin that you can see in the ‘Before I Leave’ music video.
When I called the funeral home I thought I was haggling the rental price but it turns out I just flat out bought the thing and now it’s just a conversation starter in my tattoo studio haha.

“The Wet Egg” I don’t know why this is a thing but the first day of our last tour we stopped at a service station to get some food and Bam bought a boiled egg in a tub with some spinach leaves in it. For some reason there an excessive amount of water at the bottom which lead to a random improv about how you don’t want a dry egg, then for the rest of the tour wet eggs were brought up countless times. We still say it to this day.

Mean it, I know it sounds cliché but if you really feel what you’re writing about, you can hear it.

Probably London, we’ve not made it outside the UK yet, we’ve had a few European tours planned but they’ve fell through for one reason or other.

Sonny Moore, no doubt, he literally set the tone for the emo generation then flipped it completely and became Skrillex. Like what a fucking dude!

Our dudes in ‘Loathe’ all day everyday, there’s no one like them on the scene right now, you NEED to see them live.

Bring Me The Horizon or The Amity Affliction would be ideal crowds for us, same vibe same scene.

America is the goal, our scene is so much bigger over there

We wanted to pick a name from the lyrics of a song that inspired the whole band, like we grew up listening to the same music and were influenced by the same bands so we each got a list together of song lyrics that shaped us and the line “when I’m breathing without you” from Funeral For A Friend’s ‘Escape Artists Never Die’ was on everyone’s list.

We’re on tour from the 3rd to the 8th of September across the UK. The full list of dates will be announced on our social medias.

It’s a tough call, the golden days of emo, screamo and post-hardcore were the best years of my life and the scene was huge. But I feel like the rebirth of the scene is coming soon and it has potential to be bigger and better.

There’s a t-shirt with me on which I find fucking weird. But I’ve got plans for cups, lighters, napkins, toilet covers, you name it I wanna throw our logo on it.

We’ve not long made a piano version of our first single which was really fun and different so I think we’re gonna start playing around with some acoustic vibes.

They are fucking awesome, they show us so much support at shows and every time we post a new song the comments make us feel like all the stress and effort was worth it. Some of them even have our logo tattooed on them which is mind blowing.

Like I say I’ve played shows with collapsed lungs, broken wrist, almost puked on stage with the effort, woke up with a face full of burst blood vessels and countless bumps and scrapes, but like I said when we see someone walking around in our shirts it makes it all worth it.

I know the rest of band would say me so I’m gonna say George… fuck George.

We’re like a polar bear, we’re too big for our enclosure and need to be set free to fuck shit up 🤟🏼