Crown The Empire on new singles and Warped Tour.

{Photo credit: Dani Willgress} In Crown The Empire’s dressing room, we caught up with members lead singer Andy Leo and bassist Hayden Tree about their latest singles, Warped tour and life on tour. How was the Bristol show last night? Andy: “It was great! That place I had like PTSD from because it was the […] 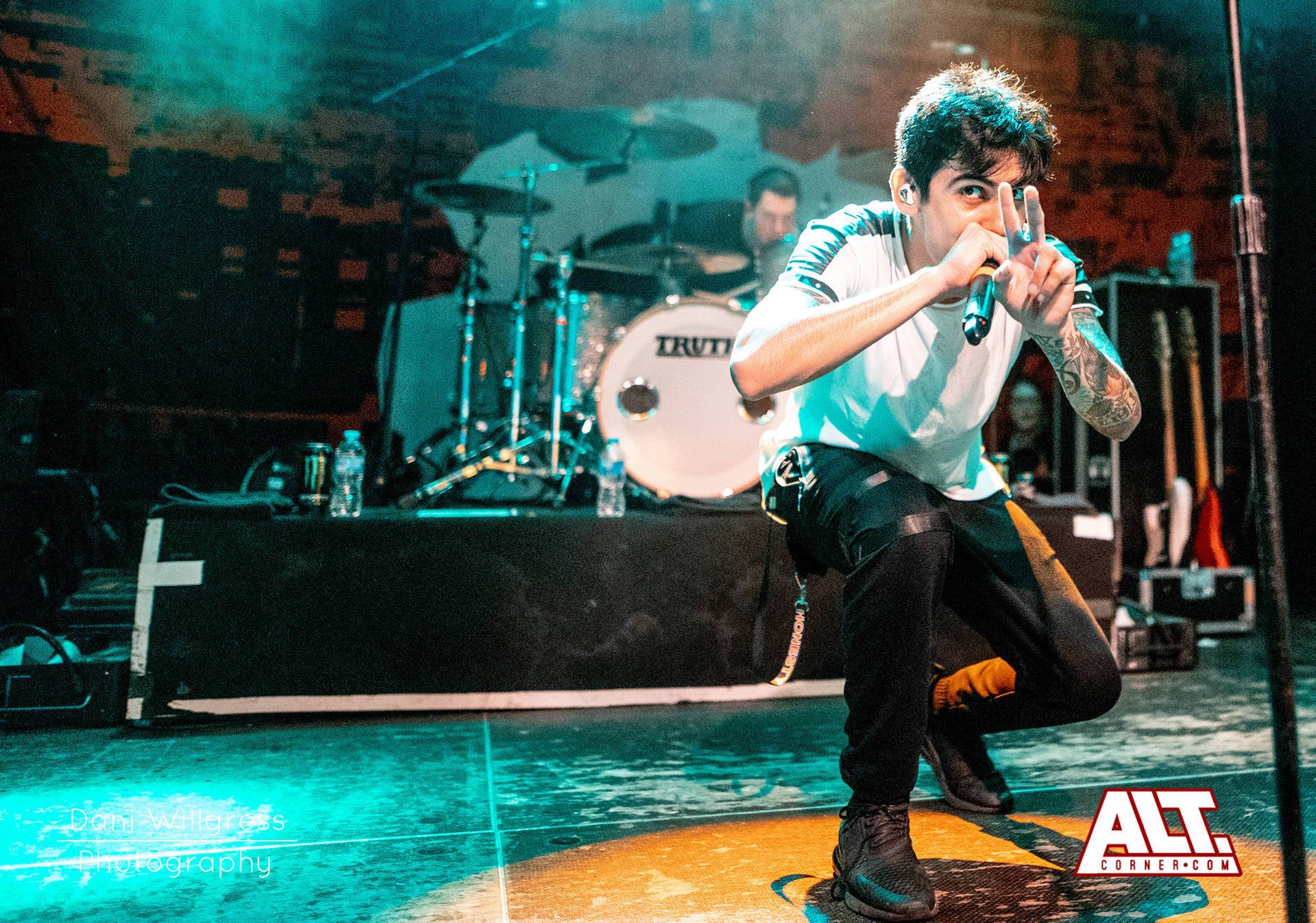 In Crown The Empire’s dressing room, we caught up with members lead singer Andy Leo and bassist Hayden Tree about their latest singles, Warped tour and life on tour.

How was the Bristol show last night?

Andy: “It was great! That place I had like PTSD from because it was the first place I ever got my pants pulled down on stage, it was traumatic! Honestly I don’t really go into the crowd for that reason I was trying to work myself up to do it but honestly I was so drunk by the end of it I kinda forgot.”

Hayden: “People kept crowd surfing shots to us, only because something in the PA system went out, front of house for whatever. Some of the cables came out so the connection between our sound and the front of house was just gone for a good 15 minutes. So Andy said fuck it and said give me shots and I’ll tell stories! And that was the beginning of the set, second song in.”

Was that some of the worst that’s happened whilst playing a show?

Andy: “Usually when playing a show we are good at things going wrong now. We’re pretty pro at it! I can talk my head of so I think its kinda fine.”

Hayden: “It’s honestly not that bad”

How is it touring with Volumes and Cold Rain?

Andy: “Amazing we fucking love it! I have the biggest crush on Volumes right now! They’re so cool. I had never really hung out with them, I know Tree has a bunch, but they’re some of the coolest dudes. Cold Rain are obviously super nice, super amazing and I’m gonna get some kick boxing stuff today so maybe those guys will box with me.”

Hayden: “I could see Gus boxing with you”

Andy: “Gus would be so down for it”

You’ve just released single What I Am, what was the inspiration behind it?

Andy: “Obviously A-Z, I mean A-B. Obviously relationship stuff but I think everyone kinda has to have a point where, it’s a big decision to decide whether you are doing something for yourself, for the right thing. But you want the best for people you want to believe that people have the best interest for you at heart too but sometimes you have too cut ties or you know, end things like that.”

Hayden: “It’s a hard decision but better yourself”.

What was it like recording the video for the single?

Andy: “It was so hot! First of all Max Moore, great guy, there was no AC in the whole building in the middle of summer in Louisville Kentucky. It went by, it was the smoothest one. Brandon actually had the idea to do a lot of the visuals, having a way bigger hand in the music video than we previously had. I think it’s my favourite music video we have done.”

You’ve just released another single 20/20 does this mean we could be seeing a new EP or album in the near future?

Andy: “We are whipping it up in the studio.”

Hayden: “We only have two more songs left to record and then it’s done!”

What was it like playing the last run of Warped Tour?

Andy: “Ah that was so fun! You sing for thirty minutes then you have the rest of the day surrounded by your friends just doing ridiculous dumb stuff every day. Did you have your bike?” [to Hayden who says yes.] “People bring out stuff like skateboards and bikes or there’s yoga people, I had my boxing stuff sparring people every day it was a lot of fun!”

Do you have any favourite memories of the festival?

Hayden: “I think anytime that we would go watch our friends it was always a good vibe, people really appreciate when you watch their set. Hanging out with Palaye Royale, like when we all showed up at RILEY’s set it was so fun.”

Hayden: “Fourth Of July was fun!”

Andy; “Oh shit! We did acid at a lake and cooked and stuff it was really fun!”

Hayden: “I drove a boat I wasn’t supposed to be driving. I drove it pretty much the entire time, it was fun!”

What was the best set you caught at Warped Tour?

Hayden: “Turnstile but they played one day. That was amazing!”

Hayden: “Obviously Underoath. They came out for like two days, that was cool”

Andy: “That was probably my favourite, everyone from the tour came out to watch them, even from across all genres, across all types of bands. Everybody loved them!”

Andy: “Oh yeah we are going right after this! I’m so stoked! I’m so stoked about it. They hit us up and we realised, I think we were planning our own tour at the time then were like Oh fuck that! We’re going with Underoath for sure! We are super excited”

What’s the funniest thing to happen whilst on tour?

Hayden: “Something funny happens every single day. There’s too many moments like that for example last night I was so drunk when I got off stage from them shots, I walked into Volumes’ green room and started screaming at the top of my lungs until my voice gave out so that’s fun! I have no recollection”

“What I am” Whispers Brandon (Hoover, guitarist) who has snuck into the dressing room.

Andy: “I would say What I Am if I wasn’t still trying to work out the feel of it because obviously we have been playing it together but we had never played it in front of people, it’s a completely different vibe. I think we are still trying to feel it out you know, like you do with sex, like is this okay oh no don’t go there okay, it’s still a feel out process.”

Hayden: “We are going onto our fourth day playing the song”

Andy: “That’s what I’m trying to say it’s our fourth day, we might get lucky!”

Who’s the messiest on the tour bus?

Andy: “We are sharing a bus with Volumes too”

Hayden: “Brandon used to be the messiest but he’s not anymore.” “

Andy: He’s done good! You know what maybe, maybe Rod. He had like three different McDonald’s meals in his bunk! I remember walking by (making a sniffing noise) pulling the curtain a little bit and he was like ‘Oh hey you want a nugget?’, so maybe him.”

What do you miss most when you go out on tour?

Hayden: “My dog and finance.”

Andy: “Humans that care about me, just joking” before laughing.

Who has the most annoying habits on tour?

Andy: “I think everyone to a degree does stuff that annoys other people. Brandon for sure though.”